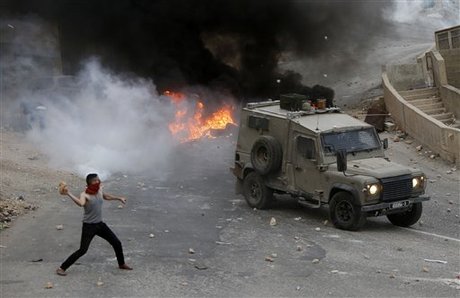 Israeli Prime Minister Benjamin Netanyahu came under pressure Tuesday from right-wing allies in his razor-thin coalition to respond forcefully to Palestinian unrest, but that could risk provoking the violent escalation of an already volatile situation.

The dilemma for Netanyahu, long known as a wily political operator, was made clear Monday night, when several thousand right-wing protesters gathered in front of his residence demanding more security and new settlement construction.

Three of his own ministers and other political allies were among those demonstrating, as Netanyahu met his security cabinet to discuss a package of new measures.

"If a terrorist decides to throw a stone, you need to deport him and all his family, to destroy his house and his family’s house, to take his citizenship. You need to hurt them," Oren Hazan, a lawmaker from Netanyahu's Likud party, told AFP at the rally.

The coalition government formed after elections in March is one of the most right-wing in Israel's history, but holds only a one-seat majority in parliament, leaving Netanyahu particularly beholden to various factions.

Those include parties representing Jewish settlements in the West Bank, where an Israeli couple were murdered in front of their children on Thursday.

Two days later, a Palestinian stabbed to death two Israelis -- a Jewish settler and a rabbi -- in Jerusalem's Old City.

Unrest has since spread in the West Bank and east Jerusalem, with Palestinian youths throwing stones and firebombs at Israeli police and soldiers, who have responded with live fire and rubber bullets.

Israeli soldiers have shot dead two Palestinians in the unrest, including a 13-year-old, and dozens of others have been wounded.

Netanyahu has talked tough, speaking of "no limits" for the security forces and a "fight to the death against Palestinian terror."

He has also set out such plans as reinforcing security forces, expediting demolition of suspected attackers' homes and more detentions without trial. Rules for when security forces can open fire have also been loosened.

In a show of force, Israel demolished early Tuesday the homes of two Palestinians who carried out attacks last year. Netanyahu also traveled to the West Bank and visited the site where the couple was murdered.

Still, he has been widely criticized by right-wing commentators and politicians, a number of whom flatly oppose the creation of a Palestinian state and see all of the West Bank as part of Israel.

He has little choice but to be concerned by their opposition, analysts say, but he would likely want to avoid responding to the unrest too harshly and provoking a broader uprising.

Fearing a third intifada, or uprising, world powers have called for calm, and members of the security establishment have spoken anonymously to Israeli media about a measured response.

"Netanyahu is a master of walking the thin line between a right-wing coalition and the appearance of being Mr. Security and making sure that the situation is not going to deteriorate," Gayil Talshir, a Hebrew University of Jerusalem political science professor, told AFP.

But the situation is more difficult for him now since centrist parties have limited influence in his coalition, she said.

They have made a wide range of demands on his government, starting with more construction of settlements in the West Bank.

Jewish settlements in the Palestinian territory are considered illegal under international law, and any such move by Netanyahu would be sure to provoke widespread condemnation, not to mention unpredictable reaction from Palestinians.

Other demands have included the re-arrest of Palestinians released as part of a deal that led to the release of soldier Gilad Shalit. In 2011, Israel freed more than 1,000 prisoners in exchange for Shalit, who had been held by Islamist movement Hamas for five years.

But while Netanyahu will have to hear them out, he also holds his own trump card, analysts say: The hardliners know this government is likely the most right-wing they can expect, so they would be hesitant to provoke another election.

"They will never have a better coalition that the one they have," said Talshir.

But some of the protesters Monday night were less concerned with such practicalities than with punishing those they refer to as the "terrorists."

“If they throw stones, they should shoot them," said 40-year-old Lizi Hameiri, who was holding a sign that read "Palestinians never wanted peace."