Nasrallah Says No Prospect of Solution in Lebanon 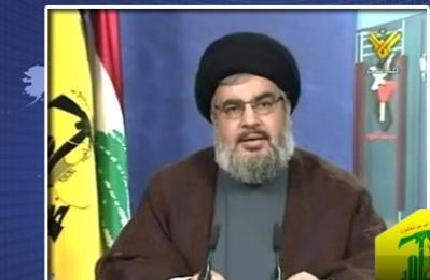 Hizbullah leader Sayyed Hassan Nasrallah has accused Saudi Arabia of killing the Lebanese during the Israeli aggression on Lebanon in 2006 and expressed pessimism on the political situation of the country.

Riyadh “killed us in the 2006 July war,” and is “responsible for all the killing in the region,” Nasrallah said.

“Since its establishment, the role of Saudi Arabia and Israel has been to serve the U.S. interests in the region,” he stated.

“There is no prospect of a solution in the country because everyone is awaiting the situation in the region to make his choices,” said Nasrallah.

He stressed that Hizbullah and its allies are holding onto their demand for the implementation of an electoral law based on proportionality and which leads to the right representation.

Differences between the March 8 and 14 alliances have stopped the parliamentary elections from taking place. Lawmakers extended their own terms last November after they failed to agree on an elections draft-law.

Nasrallah said March 14, mainly al-Mustaqbal movement, is rejecting a law based on proportionality because in the last elections it lost 35 percent of the support of its electorates.

The Hizbullah secretary-general also accused Riyadh of “trying to strike the axis of resistance all the way from Iran, to Russia and Venezuela by decreasing oil prices.”

Saudi Arabia “is running the Islamic State group and al-Qaida in Yemen although these terrorists will pose a danger on it later,” said Nasrallah.

Since March, Saudi Arabia has been leading a coalition of Sunni Arab countries battling the Iran-backed Huthi rebels who seized the capital Sanaa last year before moving south to take more territory.

In his remarks, which were published in al-Akhbar daily on Wednesday, Nasrallah held Riyadh responsible for the death of pilgrims during the Hajj because of its “bad administration and because it hasn't learned of its past mistakes.”

He accused it of intentionally not helping the victims of the September 24 stampede.

Iran has also accused Saudi Arabia of incompetence in its handling of safety at the hajj, further souring relations already strained by the civil war in Syria and conflict in Yemen.

The kingdom says 769 pilgrims died in the tragedy, but tolls provided by foreign officials and media from 24 countries add up to well over 1,000.

Europe and the US are occupied with different concerns, but Now that Russia is present in the neighborhood, together with Iran they will ensure continuity of the existing regime in Syria and pave the way for this man with beard to be the next president of Lebanon.

It's only fair, this man with beard to be elected president. He's Shia and Shias are the majority but they're rights were usurped in KSA Taef by the Maronites just like they stole their lands in Jbeil and Keserwan in the lare 1800s

The day a Shia is elected president is the day Lebanon as we know it will seize to exist.
The only way out for Lebanon is dividing the country and each religion rules itself. It's clear that the current system is not working and it will never work, it's time for people to realize that. Let's stop being ignorant and accepting the status quo. Lebanon is a failed state, look around you people, no water, no electricity, no sanitation, garbage everywhere, no services, corruption, death, poverty etc etc.
It's time to change. Religion has such a strong influence on people in Lebanon that the only option is division. It's sad but that's the only way. Muslims will not continue to accept having a Christian as a president and Christians will not accept losing that position.

Israel is no longer the enemy, but Saudi arabia is
the road to Jerusalem is now through Syria and Yemen among other places.
The iranian proxy servant has the nerve to talk about others.

Fighting Saudi is the same as fighting Israel because they are both allies in the region, both supports takfiris.

Wahabism and zionism are one.

shi3ism and terrorism are one.

lol at how hezbollah sheep redefine everything. Both "shiasim" and "wahabism" are sects within the moslem faith. Go read some books or at least google it.

Thanks for the laugh Mystic, you're a foreigner just like the ones you blame and accuse, get out of Lebanon.

Riyadh “killed us in the 2006 July war,” and is “responsible for all the killing in the region,” Nasrallah said.

You and your masters in Teharan were the ones killing us and destroying our economy. KSA protected our sinking currency and rebuilt our infrastructure that you single handedly destroyed.

Nassrallah you are nothing but an iranian sectarian carrying out the orders of your masters in Iran.

The Lebanese government and specially the General Security must answer how these terrorists were allowed to enter Lebanon and jeopardize our relationship with the rest of the Arab world.

on the other hand any Syrian or lebanese opposed to Assad and Hezbollah is arrested and accused of terrorism. That is the general security of abbas ibrahim.

and when you criticize him ( on Facebook), he locks you up in jail like what happened with Michel Dwaihi in Zoughrta.

after the iranian nuclear deal has been signed, Iran's venom and animosity is directed at KSA. Nassrallah just follows orders of his superiors.

"No solution"? After you destroyed National Unity and divided the country !!!

i love the way this guy twists truths to take advantage of it... he is deliberately avoiding détails to make appear he is right when there is much more to what he says concerning the saudis that he will avoid saying as it goes against his new propaganda...
but of course his sheep will gob anything he says ....

one example :"The Hizbullah secretary-general also accused Riyadh of “trying to strike the axis of resistance all the way from Iran, to Russia and Venezuela by decreasing oil prices.”

whereas saudis decreased the prices because the US is self sufficient in oil thanks to the shale oil so by decreasing the prices they will make shale oil less attractive to exploit.... it was aimed primarily against the US not against his "axis of resistass"....

Sooo easy to blame all destabilization, poor economy, government paralysis etc.. On others.
No wonder when we don't look at the mirror it is hard to see how devilish we are.

I thought in 2006 Israel launched war on Lebanon. I remember something like Hizb took hostage some Israeli soldiers and then everything spiraled out of control!
i guess fr now on it is KSA down south border! heheh how nice..

Nasrallah plays bad cop to Iran's relatively good cop and nothing more.
A propaganda tool, talking negative warmongering rubbish all the time.
What do I care about Saudi, Iran or Israel if I don't have electricity, water, the prospect of making a living and my mounts of trash are surrounding me.

I wonder what Mastica and Northern and not-mowaten and....will say when Israel and Iran will ally in the future????

Not necessarily...these followers have been used to blindly follow :
"Our leader knows more than us". "If our leader says something, there must be very good reasons". "We totally trust our leader". "Our leader is always right"....and other B.S. type of rationalizations which paralyze the last neurone of their brain.

hassan baby this is a bit way over the top. The lady doth protest too much, methinks

"the last elections it lost 35 percent of the support of its electorates"..

Now if it were not clear before, it is clear now. The paralysis of the Lebanese system backs up to the fuzzy King Rat depicted in the picture at the head of this article. He has declared that Lebanon will remain paralyzed until the "regional situation clears." And it is not clear at all. Russia's entry into the Syria War is not as an aid to Iran, but a competitor to be at the table when it is all over taking Russia's share which will claimed to have been earned during the war. Hezbollah's share is affected, and so the regional situation has become murky, and because Nasrallah has said it, so has Lebanon's.

the criminal just exonorated Israel of all its present and past alleged crimes and directed his enmity towards saudi arabia.

What do Hizballah, KSA and Israel have in common? NONE OF THEM ARE LEBANESE....food for thought.

What more can be said......Filthy murdering militia