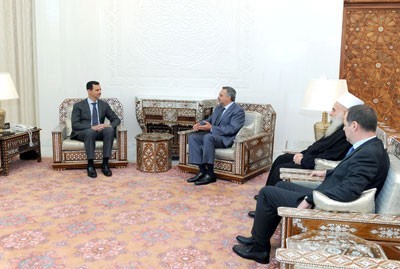 The head of the Lebanese Democratic Party MP Talal Arslan condemned on Tuesday the various positions taken by some Lebanese and regional forces over the developments in Syria, saying that they reflect the ambitions of foreign powers that seek to weaken Syria.

He said after holding talks in Damascus with President Bashar Assad: “Syria has overcome its crisis and it will emerge stronger than it was before.”

“Syria is the first line of popular Arab defense against western-backed Zionist plans,” he continued.

“We take this opportunity to assert that Syria has presented examples of the Arab and popular civilization and it does not need lessons and roadmaps from anyone in these matters,” he stressed.

Since March, Syria has been witnessing anti-regime protests that have been met by a violent crackdown by the regime.

The U.N. estimates that some 3,000 people have been killed in the demonstrations.

He is going to pray while everybody is coming back ,

Arslan's father would have been a March 14 supporter..... Talal has no idea what he is doing.... Even his allies dumped him when they formed the gov't....

ask him this time next year????

"Syria is the first line of popular Arab defense ..." syria is the LAST line of arab, but maybe the FIRST line of PERSIAN defense..

traitor. traitor to the ones who died for their cause.