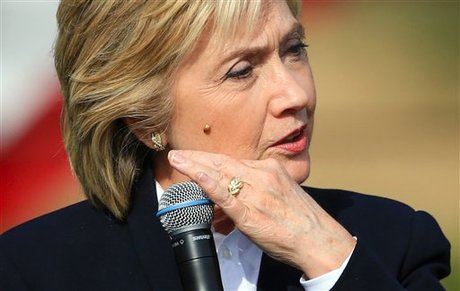 As Barack Obama's secretary of State, Hillary Clinton loyally carried out his agenda, but since mounting her presidential bid she has split with the White House on several key issues, including global trade.

Drilling in the Arctic Ocean is too risky, she argues. Deportations? The administration's record rate of sending undocumented immigrants home is unnecessarily "breaking up families," according to Clinton.

The White House has dilly-dallied long enough on whether to approve the Keystone XL Pipeline, and Clinton recently came out against it. As for Syria, she has complained that aiding and arming Syrian rebels was taking too long.

Gun violence? If elected, Clinton said she would try to circumvent a gridlocked Congress to implement stricter gun laws.

Obamacare? Clinton acknowledges that the controversial health care law has largely worked, but she wants to end its tax on high-end insurance plans.

While Clinton has praised the two-term president for digging America out of an economic ditch, her parting ways with Obama on key policies signals she is her own woman on the campaign trail.

The latest and most prominent break came Wednesday, when the 2016 Democratic frontrunner announced her opposition to the historic trade accord that Washington sealed this week with 11 other Pacific Rim nations.

"As of today, I am not in favor of what I have learned about it," she told public broadcaster PBS.

"I don't believe it's going to meet the high bar that I have set."

The Republican National Committee pounced on her "flip flop" Wednesday, branding it a "case study in political expediency" and an example of why many Americans do not trust her.

She caught flak from her Democratic nomination rivals too, including former Maryland governor Martin O'Malley.

"Leadership isn't changing your position on the eve of debate," he tweeted, referring to next week's debut Democratic showdown. "It's standing up for the American worker, always."

Political shape-shifting can be dangerous for a candidate as it arouses suspicion about character, motive and political gain.

Clinton has been more firm on Syria. In her book "Hard Choices," she wrote that while secretary of state she urged Obama to arm and train Syrian rebels far earlier than he ultimately did.

And last week, she called for creation of a no-fly zone over parts of Syria, something the White House has so far rejected.

Clinton's differences with Obama go back to their occasionally acrimonious 2008 nominations battle, in which Obama needled her over her Senate vote for the Iraq war, which he said he opposed.

Her recent departures from White House doctrine have caught the president's eye.

"I also think that there's a difference between running for president and being president," Obama told reporters this month after Clinton broke with him over Syria.

"If and when she's president, then she'll make those judgments," he added.

"I think Hillary Clinton would be the first to say that when you're sitting in the seat that I'm sitting in  the situation room, things look a little bit different, because she's been right there next to me."

Clinton has repeatedly stressed that she is not running for a third Obama term -- or a third Bill Clinton term, for that matter.

But for the former first lady, senator, and secretary of state, the question remains how far she will go to set herself apart.

If she successfully charts her own course, she could make history as the nation's first female commander in chief.

She would also defy the American political reality that no Democrat since World War II has won election following a fellow Democrat's two-term presidency.