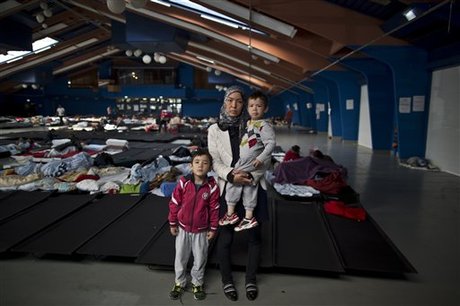 Europe's migrants crisis was expected Sunday to help give a major boost -- and possibly even a shock victory -- to Austria's far-right Freedom Party in elections in the city state of Vienna.

Fifteen years after the FPOe under the late Joerg Haider stunned Europe by entering the federal government, polls put the party almost level with the center-left Social Democrats (SPOe) in Vienna.

"We will succeed, I can feel it," the FPOe's charismatic leader Heinz-Christian Strache, 46, told a rally on Thursday, calling the vote a "historic chance".

Unease about the arrival of hundreds of thousands of migrants into Europe this year has boosted nationalists across the continent, and victory in the Austrian capital would be a major success.

Even though Strache would likely find it impossible to form a coalition, his party coming first would be nothing short of an earthquake in Austrian politics.

The SPOe have run this city of 1.8 million people uninterrupted since 1945, and the party's jolly but wily Michael Haeupl, 66, has been mayor for 21 years.

Coming second in this SPOe fiefdom -- dubbed "red Vienna" -- would therefore put not only Haeupl under severe pressure, but also the head of the party, Chancellor Werner Faymann.

The next general election is not scheduled until 2018, but the FPOe leads national opinion polls with more than 30-percent support, well above the SPOe and Faymann's federal coalition partners, the center-right People's Party (OeVP).

Austria has seen more than 200,000 migrants enter the country since the beginning of September, most of whom travel onwards to Germany or Scandinavia.

But the government still expects some 85,000 asylum claims this year, making the Alpine country of 8.5 million people one of the highest recipients in Europe on a per-capita basis.

Strache, a former dental technician, has called for Austria to copy Hungarian Prime Minister Viktor Orban and put fences up on the borders -- something rejected by Faymann.

"Every property owner does this with his house, putting a fence around his garden and not leaving the doors and windows open, so unwelcome guests don't come," Strache said earlier this year.

But emulating Marine Le Pen, the head of France's National Front, Strache has also toned down the anti-immigration rhetoric seen in earlier campaigns in his 10 years as FPOe head.

Gone are the slogans vilifying Islam. Now the posters all over Vienna are more subtle: "Help for our poor", they declare, adding in smaller letters "Instead of open doors for economic migrants".

"Security for our people," reads another, below a grinning Strache. "Instead of open borders for criminals".

At the same time, Strache has campaigned on traditional SPOe issues like alleviating poverty and more affordable rents, while even encroaching on liberal topics like slashing bureaucracy.

"He has shifted his political discourse," political analyst Anton Pelinka told AFP. "The xenophobic root was still there, but in a more latent form,"

"This... is a choice between hate, rejection and ostracizing the poor on one side, and character, decency and humanity on the other," Haeupl told a rally on Friday.

Exit polls were expected soon after voting ends at 1500 GMT, followed by projections at 1600 GMT and the first results at 1630 GMT.