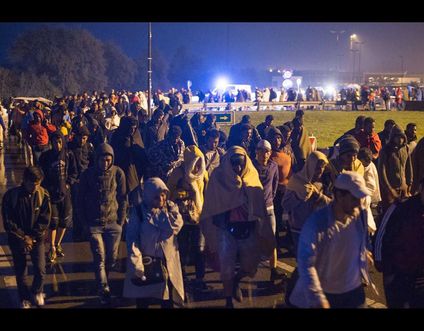 A total of 12,220 people entered eastern Austria in the previous 36 hours as the migrant flow from the Balkans to northern Europe continued, police said Monday.

On Sunday, 8,540 people entered the country via the Nickelsdorf crossing point with Hungary, followed by another 3,680 between midnight (2200 GMT) and 7:00 am on Monday, they said.

The total is higher than in recent days, with daily totals over the previous week averaging around 5,500, the vast majority of whom seek to travel onwards to Germany and elsewhere.

Police spokesman Gerald Koller told AFP that the increase follows a recent rise in numbers entering Macedonia from Greece on their way northwards through Serbia, Croatia and Hungary.

Hungarian police said 7,879 migrants entered the country on Sunday and 7,907 on Saturday, also higher than the average of previous days.

The crisis has exposed deep divisions within the 28-nation European Union over how to distribute the new arrivals and stemming the flow, as well as a rise in popularity for nationalist parties.