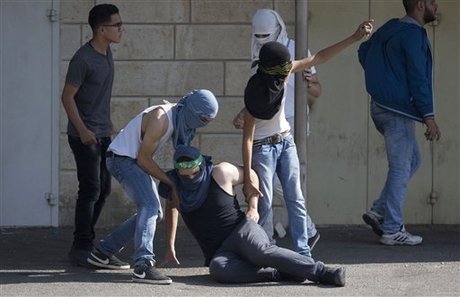 Israel on Sunday rejected a proposal to send international observers to a flashpoint holy site in a bid to calm unrest after five more stabbing incidents defied a security crackdown.

Diplomatic moves to halt the more than two weeks of unrelenting violence gained steam meanwhile, with U.S. Secretary of State John Kerry saying he planned to meet both the Israeli and Palestinian leaders in the coming days.

In yet another sign of tensions, ultra-Orthodox Jews illegally visiting a West Bank holy site set ablaze last week were assaulted by Palestinians, while some were also arrested.

Clashes also broke out in the West Bank city of Hebron, where three attacks occurred on Saturday.

The unrest and stabbing attacks or attempts on Saturday came as the violence raised fears of a full-scale Palestinian uprising.

At the start of a cabinet meeting Sunday, Prime Minister Benjamin Netanyahu rejected an idea from France that would see international observers sent to Jerusalem's Al-Aqsa mosque compound.

Clashes at the compound between Israeli police and Palestinian protesters in September preceded the current wave of violence.

The site is sacred to Muslims and Jews, who refer to it as the Temple Mount. Jews are allowed to visit but not pray there to avoid provoking tensions, and Netanyahu has said repeatedly he has no intention of changing the rules.

With international concern mounting, Kerry said he would meet both Netanyahu and Palestinian President Mahmoud Abbas later this week.

Kerry said he would meet Netanyahu in Germany, where the Israeli leader is scheduled to travel on Wednesday, before talks with Abbas and Jordan's King Abdullah at an unspecified location in the Middle East.

Checkpoints have been set up in Palestinian areas of east Jerusalem, where many of the attackers have come from, and some 300 soldiers on Sunday began reinforcing police.

As fears have mounted, Tel Aviv city officials have barred cleaning and maintenance employees from schools during times when students are present, with parents concerned over possible attacks against children.

Arab Israelis account for the majority of such employees, public radio reported.

Most of the attackers have been young Palestinians wielding knives and believed to be acting on their own.

Including alleged assailants, 41 Palestinians have been killed since the upsurge in violence began on October 1, while seven Israelis have died.

Violent protests have also erupted in east Jerusalem, the occupied West Bank and the Gaza Strip.

Israel on Sunday closed the only civilian crossing from Gaza into Israel, except for humanitarian cases, while damage was being repaired.

On Saturday, four Palestinians were shot dead and a fifth was wounded in attacks on Israelis in east Jerusalem and the West Bank.

All of the incidents involved a Palestinian assailant attempting to stab an Israeli.

Overnight, a group of ultra-Orthodox Jews attempting to illegally visit a holy site in the West Bank set ablaze last week were assaulted by Palestinians while five were also arrested, Israeli authorities said.

Palestinians torched the site holy to Jews on Friday in an incident that threatened to further inflame tensions.

The incident saw a group of about 30 religious students from a school in Jerusalem travel to Joseph's Tomb in the northern West Bank city of Nablus despite not having the required authorization from Israel's military.

They told police they intended to repaint the shrine after the fire.

A Palestinian security source denied that police had beat them but said that dozens of civilians arrived later and burned one of the cars used by the Jewish students.

Most of the students fled, but five were arrested by Palestinian police and later handed over to Israeli authorities, according to Israeli police.

Israeli police called the students' visit "completely irresponsible" and said the incident "could have ended tragically".

Joseph's Tomb, inside a compound in the Palestinian refugee camp of Balata in Nablus, has been the scene of recurring violence between Israelis and Palestinians.

The shrine is under Palestinian control and off-limits to Israelis except on escorted trips organized by the army.