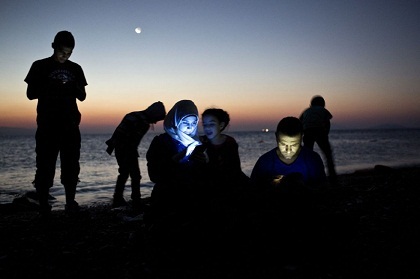 The navy thwarted on Wednesday an attempt to illegally smuggle a number of migrants from Lebanon, announced the army in a statement.

It said that 53 people were arrested off the coast of the northern city of Tripoli as they attempted to illegally depart the country in a Lebanese boat that can support no more than 15 people.

The migrants were brought back to shore and investigations are underway with them.

Later on Wednesday, a Turkish Airlines plane landed at Beirut's airport, carrying the bodies of seven members of the Lebanese Safwan family who drowned Saturday while trying to reach Europe illegally from Turkey.

The seven were identified as Fayez, Mariam, Milani, Maya, Leen, Mustafa, and Houriya.

Two survivors, Mustafa and Maher Safwan, are expected to arrive in Beirut at dawn Thursday, the National News Agency said, noting that Wael and Malek Safwan remain missing while Iyad Safwan is still being interrogated by Turkish authorities.

Representatives of Speaker Nabih Berri, Prime Minister Tammam Salam, the High Relief Council, Hizbullah and the Higher Islamic Shiite Council joined the victims' relatives as they received the coffins at the airport.

The bodies were transferred to the state-run Rafik Hariri University Hospital in Beirut. The funeral will be held Thursday in the Ouzai area.

Earlier on Wednesday, An Nahar daily reported that a ship transporting Lebanese and Syrian migrants to Europe departs the port of Tripoli on a daily basis.

Sources from the port told the daily that a ship transporting hundreds of Syrians and over 15 Lebanese departs the city to Turkey every day.

The Lebanese are mainly residents of the North.

“This operation has been taking place for the past three-and-a-half-months,” said the sources.

They remarked that the migrants were initially lone youths, but a recent pattern emerged of entire families seeking to leave the country.

Once in Turkey, the migrants make their way to Europe, explained the sources.

Lebanese migrants from the North have exceeded 2,000, while this number tops 4,500 when departures from Beirut's Rafik Hariri International Airport are included.

An Nahar said that some 1,050 Lebanese have made it safely to Europe.

I wish the palestinians would board that ship too. Europeans are better fitted to take care of them than us. Also I wish they would do competition to that ship, like 2 or 200 ships per day.

The fact that Lebanese are ready to throw themselved into the sea is majestic failure of the lebanese government. Not only they don't ensure decent living conditions, they also gave no hope to people in need.

Lebanese have been migrating from their land throughout their history...just look at the thriving communities from Lebanese descent in places like Brazil, Mexico and Argentina to name a few...

who is the army to permit itself to prevent people from escaping. They should let them go.

So the government tolerates/creates/promotes hellish conditions for everyone, and then also prevents you from leaving?

Really? Talk about Kafkaesque, PLUS do we need to retain more foreigners in the country?