Aoun: We Must Resist Government Weapons if They Are Turned against Citizens' Rights 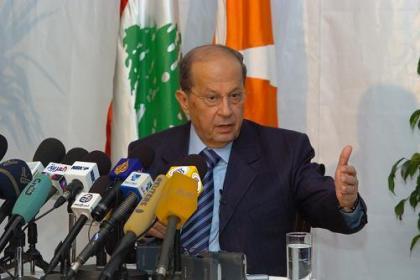 Free Patriotic Movement leader Gen. Michel Aoun on Friday denied a call for civil disobedience, but said Lebanese should "resist" if government weapons were turned against the rights of the citizens.

He said calls for civil disobedience would be considered a move against government weapons.

Aoun was apparently responding to ministerial sources who told pan-Arab daily Al-Hayat that the former army general is "in one way or another calling for civil disobedience against the government."

"How will he respond in the event that some (people) asked not to cooperate with the ministries of energy and telecommunications?" one source wondered after Aoun urged citizens not to obey police's Intelligence Bureau.

"Won't this cause the destruction of State institutions?" the source asked.

"This disobedience would be against legitimate weapons which defend the (citizens) rights and help implement the law," he told reporters in Rabiyeh.

"But when these weapons are turned against citizens' rights, we must resist; and this is the duty of citizens and this is what we are calling for," Aoun stressed.