IS Advances on Key Regime Town in Northern Syria 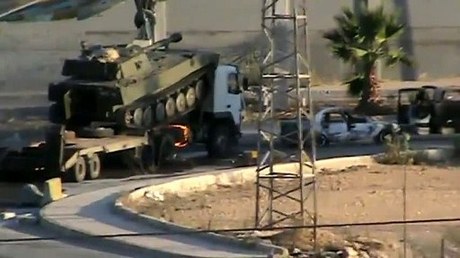 The Islamic State group advanced on Tuesday to the outskirts of a major government military stronghold in northern Syria, a monitoring group said.

The Syrian Observatory for Human Rights said IS had entered the northeastern edges of Safireh, a town which lies southeast of Syria's second city Aleppo.

"IS has broken the defensive lines of the regime in Safireh, which is the most important military bastion for the regime in the southern parts of Aleppo province," Observatory director Rami Abdel Rahman told AFP.

He said the regime controlled several "large" weapons depots inside the town and that IS fighters and government forces were locked in fierce clashes on the city's outskirts.

A statement published online by IS also said that "the regime's primary defensive lines have fallen" around Safireh.

It claimed that fighters from the jihadist group had seized several neighborhoods inside the town.

A Syrian military source confirmed to AFP that Syrian troops had lost control of territory around Safireh "as a result of a Daesh attack," using the Arabic acronym for IS.

Syria's government launched an offensive in southern parts of Aleppo province on October 17 and has advanced in a handful of villages.

But the attack on Safireh has "put the regime on the defensive when it was on the offensive," Abdel Rahman said.

In 2012, the U.S. Congressional Research Service said information suggested that nerve gas and mustard gas was being produced in Safireh and other parts of Syria.

After a chemical attack that killed hundreds in the Eastern Ghouta region east of Damascus in August 2013, Syria agreed to declare and hand over its chemical weapons in a deal overseen by the Organization for the Prohibition of Chemical Weapons.

In June, the OPCW said the last of Syria's declared chemical weapons had been shipped out of the country.

But there have been concerns since then that toxic gases, like chlorine, have been used in attacks in the country.

But I thought you said Assad and ISIS were allies? Why would Russia need to bomb there then?