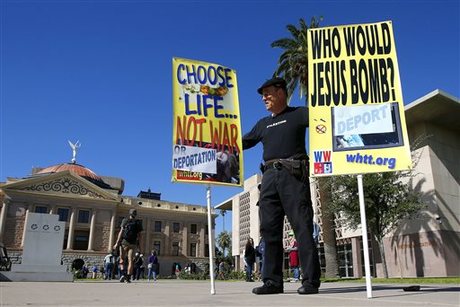 In an unusually fierce rebuke, Obama struck out at American politicians who have called for migrant curbs in the wake of the Paris terror attacks.

Describing calls for different rules for Christian and non-Christian migrants as "offensive and contrary to American values," Obama said shrill election-fueled debate on migration was only helping the Islamic State group.

"I cannot think of a more potent recruitment tool for ISIL than some of the rhetoric coming out of here in the course of this debate," Obama said using an acronym for the group.

Suggestions that some of the attackers may have been migrants has led to tough comments on the 2016 campaign trail from the likes of Republican candidate Senator Ted Cruz.

"They've been playing on fear to score political points or to advance their campaigns and it's irresponsible. It needs to stop because the world is watching," Obama said.

Around half of the governors of the 50 U.S. states have urged Obama to suspend a plan to admit 10,000 Syrian refugees this fiscal year.

"We are not well served when in response to a terrorist attack we descend into fear and panic," Obama said in response.

"We don't make good decisions if it's based on hysteria or an exaggeration of risks.

"They are scared of widows and orphans coming into the United States of America."

Officials "briefed the governors on the rigorous screening and security vetting process" for almost 90 minutes.

In Manila, Obama also tried to stress that current screening was rigorous, and would weed out jihadists.

"Under current law, it takes anywhere from on average 18 to 24 months to clear a refugee to come into the United Sates," he said.

"They are subjected to the most rigorous process conceivable. The intelligence community vets fully who they are.

"An entire apparatus of all our law enforcement agencies" is devoted to screening the refugees."