Obama Says World Must Not Succumb to Fear of Terror 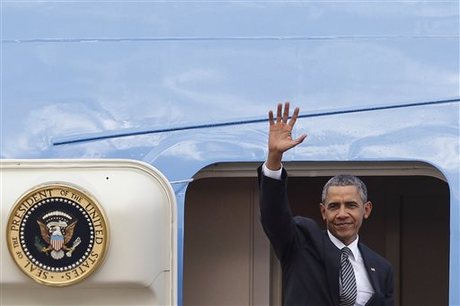 U.S. President Barack Obama called Sunday for resolve in the face of heightened jihadist threats, insisting panicked citizens must not succumb to fear and urging world leaders not to abandon a climate summit in Paris.

With Brussels in lockdown, cities from Beirut to Bamako reeling from attacks, and Americans jittery that they too may come under assault, Obama said the world must show steel.

That starts, he said, with leaders who are scheduled to attend climate talks later this month in Paris, where 130 people were killed in one night of blood-soaked violence.

The perpetrators of the Paris attacks were not "masterminds" he said, but rather "a bunch of killers with good social media".

"It's absolutely vital for every country, every leader, to send a signal that the viciousness of a handful of killers does not stop the world from doing vital business," he said.

They must also show that "Paris, one of the most beautiful, enticing cities in the world, is not going to be cowered by the violent demented actions of a few".

Facing accusations that he has allowed the Islamic State group to spread by refusing to send U.S. troops to Syria or step up the air campaign there, Obama made his most determined pledge yet to win the fight.

"The American people in the past have confronted some very real, enormous threats. And we beat them. We vanquished them," he said. "This will be no different."

But Obama sought to show that even as allies take the fight to the Islamic State group in Syria and Iraq, an equally vital battle will be fought on the home front.

"They cannot strike a mortal blow against France or the United States or a country like Malaysia, but they can make people fearful," Obama said, speaking in Kuala Lumpur and using an acronym for Islamic State.

Obama was ending a nine-day trip to Turkey and Asia that has been clouded by the Paris terror attacks and credible threats that prompted Belgian authorities to deploy troops and impose a lockdown as they hunt suspects.

He also addressed sometimes shrill calls for the United States to close its doors to refugees from Syria and Iraq, for fear jihadists may lurk among them.

He urged Americans against "succumbing to the fear that allows us to abandon our values, to abandon how we live".

Obama, the son of a migrant mother and migrant father, voiced his personal determination to face down anti-refugee measures that he has already threatened to veto.

Remembering a Saturday visit to children from Myanmar at a refugee center in Malaysia, Obama urged compassion.

"If you are a parent and you saw those kids, and thought about what they went through, the notion we couldn't find a home for them anywhere in the United States of America...?" he said, trailing off into anger.

"That is contrary to our values."