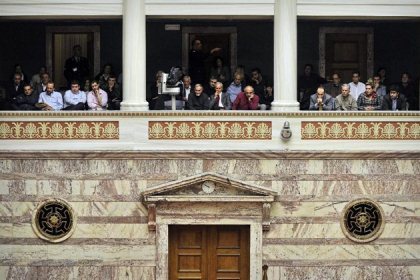 Greek Prime Minister George Papandreou Saturday was to start talks on forming a national crisis government to stave off bankruptcy in his debt-laden country after winning a nail-biting confidence vote.

In a dramatic late-night parliament session that began Friday evening and went well into the early hours of Saturday morning, Papandreou also hinted he would step aside in the interest of national unity.

Visibly moved after receiving warm applause upon entering the chamber, the embattled 59-year-old said he was prepared to put his country ahead of personal ambition during Greece's worst economic crisis in decades.

"I am not interested in a chair, the last thing I am interested in is whether I am re-elected," said Papandreou, who swept to a landslide national election victory in 2009.

"On Saturday, I will go to the president of the Republic so we can agree on forming a consensus government and even the question of who will lead it," he said. That meeting was expected to occur at midday local time (1000 GMT).

The move, designed to placate rebels in his own socialist party, appeared to work, as he won a cliff-hanging confidence vote around an hour later by a narrow margin.

A total of 153 deputies among 298 present approved the motion, with 145 voting against, the parliament speaker said to sustained clapping within the chamber.

The result had hung in the balance amid unbearable tension as each MP voted in favor or against the motion, with the "yes" and "no" camp neck-and-neck right to the end.

Adding to the pressure, several thousand communists staged noisy protest in front of the floodlit building as the debate took place.

But despite carrying the confidence vote, Papandreou still faces an implacable center-right opposition leader, who called for snap elections, which the prime minister said would be a "catastrophe".

Antonis Samaras, the leader of the opposition New Democracy party, said in a statement on Saturday: "The mask has fallen. Papandreou has rejected our proposals and he must take responsibility for that.

"Elections are now the only answer."

Time is pressing for Greece's politicians to set aside their differences as the country is fast running out of cash.

And the aim of the new unity government, when it is formed, will be to push through the terms of Greece's latest bailout package, agreed last week in hard-fought talks in Brussels, which comes with strict austerity conditions attached.

Venizelos told MPs earlier Saturday that Greece needed a representative to attend a meeting of eurozone finance ministers in Brussels on Monday where talks on the next tranche of bailout cash would take place.

"Playing politics with fire," the Kathimerini daily wrote on its front page.

The vote capped a tumultuous week for Greece that began with Papandreou's disastrous call to hold a referendum on the 100-billion-euro ($138-billion) EU bailout package that sparked revolt in his own party and roiled markets.

Analysts had warned that renewed political uncertainty could halt the disbursement of a fresh eight-billion-euro loan package that Greece needs to pay the bills.

Following some rigorous discussions with the German and French leaders Papandreou swiftly scrapped the referendum idea before the confidence vote.

Venizelos, tipped in the media to become interim prime minister, said that elections could be held once negotiations on the EU bailout package are complete.

He said the new government would be in power "until the end of February" when details on the plan are expected to be completed "so they can be submitted to the electoral inspection of the Greek people."