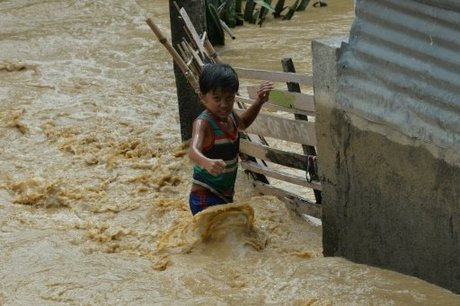 An additional 160 million kids are growing up in areas suffering severe droughts, mostly in Africa, UNICEF said in the report titled "Unless We Act Now."

"Children will bear the brunt of climate change. They are already bearing a lot of the impact," said Nicholas Rees, a policy specialist at UNICEF and one of the report's authors.

"The sheer number of children exposed to climate risk is alarming," said the report.

U.S. President Barack Obama and China's Xi Jinping are joining more than 135 world leaders in Paris next week for an international conference aimed at clinching the first agreement on tackling global warming in 20 years.

The most urgent task is for world governments to agree on curbing greenhouse gas emissions, said Rees, but action is also needed on the national level to deal with the impact.

"When impacts occur, children must still be able to go to school and get the health care they need," he said.

A key concern is exposure to diseases that could become deadlier as a result of climate change and rising temperatures, including malaria, pneumonia, diarrhea and malnutrition.

Heatwaves, which have become more frequent, are causing more severe rashes, cramps, exhaustion and dehydration, which is a common cause of hyperthermia and death among infants and young children.

The impact of droughts on agriculture is leading to malnutrition and under-nutrition, which is responsible for half of worldwide deaths of children under five.

Of the 160 million children who live in areas affected by severe droughts, almost 50 million are in countries where half or more of the population lives on less than four dollars per day.

"A poor child and a rich child don't stand the same chances" when a flood or a drought hits, he said.

Coastal areas in South Asia, Latin America and the Caribbean are among the most vulnerable along with Pacific islands, the Horn of Africa and equatorial Africa.

"Today's children are the least responsible for climate change, but they, and their children, are the ones who will live with its consequences," said UNICEF director Anthony Lake.

The climate conference opens on November 30 and is due to wrap up on December 11.