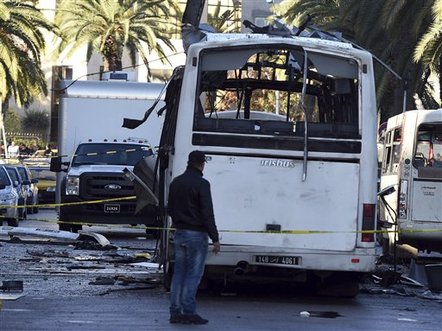 Tunisia has identified three suspects wanted over Tuesday's suicide bombing that killed 12 presidential guards and is offering a financial reward for information leading to their arrest.

A preliminary probe has proven that these "terrorist elements... (are) linked to the explosion on a bus of the presidential guard," the statement said.

The ministry also promised "an important financial reward" for "anyone providing information leading to the arrest" of the three suspects.

Tuesday's suicide bombing in the center of Tunis was claimed by the jihadist Islamic State group and authorities have identified the bomber as a 26-year-old Tunisian traveling salesman Houssam Abdelli.

The interior ministry has said that dozens of suspects have been arrested since the attack.

IS also claimed responsibility for two attacks earlier this year at the National Bardo Museum in Tunis and on a hotel near the Mediterranean resort of Sousse that killed a total of 60 people, all but one of them foreign tourists.

The secretary of state for national security, Rafik Chelly, told private Mosaique FM radio that all these attacks were planned in neighboring Libya.

Tunisia, the cradle of the Arab Spring uprisings, has been plagued by Islamist violence since the 2011 overthrow of longtime dictator Zine El Abidine Ben Ali.

IS has exploited the chaos that spread across Libya since the 2011 revolt that toppled and killed veteran leader Moammar Gadhafi to gain a presence in the oil-rich North African state.