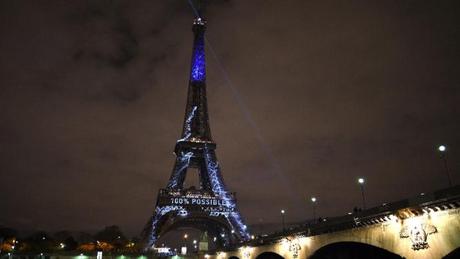 But, speaking after attending an historic climate summit with 150 other leaders, Obama voiced confidence mankind would make the tough decisions to brake rising temperatures.

Obama and others employed lofty rhetoric Monday to inject energy into the start of the U.N. negotiations, which are due to deliver a global masterplan on December 11.

The president followed that up Tuesday with grim warnings for the near future if the temperature curve went unchecked.

"Before long we are going to have to devote more and more of our economic and military resources, not to growing opportunity for our people, but to adapting to the various consequences of a changing planet," Obama said.

"This is an economic and security imperative that we have to tackle now."

The talks in Paris aim at an accord which, taking effect from 2020, would slash carbon emissions -- the emissions that come mainly from burning fossil fuels --  and deliver hundreds of billions of dollars in aid for climate-vulnerable countries.

But it is only the latest chapter in a 25-year-old diplomatic saga marked by spats over burden-sharing and hobbled by a negotiation system of huge complexity.

Behind their vows of support, many leaders have often preferred the short-term benefits of burning cheap and dependable fossil fuels to power prosperity, ignoring the consequences of carbon pollution.

Despite this, Obama said he believed the global political landscape was shifting, boding well for Paris and beyond.

"Climate change is a massive problem, it is a generational problem. And yet despite all that, the main message I have got is, I actually think we are going to solve this thing," Obama said.

At the heavily secured summit venue in Le Bourget on the northern outskirts of Paris,  a city on edge since the November 13 terror attacks that killed 130 people, bureaucrats from 195 nations began a frantic effort to distill a 54-page text into a global warming blueprint.

They have until just Saturday to iron out as many differences as they can, before handing the text over to environment and foreign ministers and a final push for a pact.

"We are really up against the clock and up against the wall," Daniel Reifsnyder, one of the talks' co-chairs, told the negotiators on Tuesday morning.

While there are grounds for optimism, a similar effort failed spectacularly in the 2009 edition of the annual U.N. talks in Copenhagen, which aimed at a post-2012 deal.

Heaping pressure on negotiators, researchers for respected group Climate Action Tracker said Tuesday the clock was ticking even faster than before.

"There is a solution to this issue of too many coal plants on the books: cancel them," said Pieter Van Breevoort of Ecofys, an energy research organization which is part of Climate Action Tracker.

"Renewable energy and stricter pollution standards are making coal plants obsolete around the world, and the earlier a coal plant is taken out of the planning process, the less it will cost."

The U.N.'s World Meteorological Organization (WMO) warned last week that "the symbolic and significant milestone" of 1 C warming would likely be passed this year.

Many issues could derail the Paris talks, including poor nations' demands for billions of dollars in support from rich countries to help them reduce their emissions and adapt to the devastating consequences of global warming.

Dozens of poor nations are insisting that a safer warming target of 1.5 C also be enshrined in the accord, along with the 2 C goal backed by the United States, China and other big polluters.

Small low-lying island states fear that giving up on the lower target would doom them to oblivion as seas rise.

The legal status of the accord is another bone of contention.

Obama is facing intense domestic opposition over committing the United States to any international legal framework on climate change, which many prominent Republicans say is a hoax or lacking in evidence.

The president said Tuesday he supported "legally binding" commitments for some areas within a planned Paris pact, though not national voluntary action plans submitted to the U.N. charting how countries propose to cut their emissions.

"The process, the procedures, that ensures transparency and periodic reviews, that needs to be legally binding," Obama said.

Under U.N. rules, the final pact has to be approved unanimously, or not at all.

Some developing nations have been quick to voice their objections in Paris to what they perceive as rich-world hypocrisy.

Nicaragua's lead negotiator, Paul Oquist, said Tuesday his country would not make any pledge to cut its emissions -- a key plank of the planned pact -- because that would let rich countries off the hook.

On Monday, the leaders of China, India, Zimbabwe and many other developing nations also told the summit rich nations must shoulder the biggest burden, and they should still be able to pollute more so they can fight poverty.