Floating Homes and Stilts in Britain to Face Flood Risk 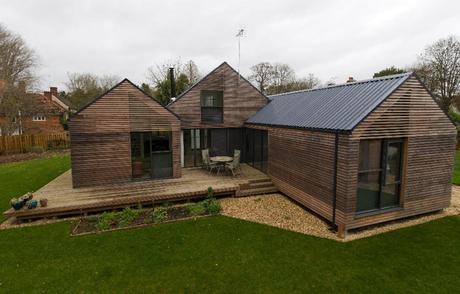 Unlike many of their neighbors living near the banks of the River Thames in southwest England, Martin and Joanna worry little about their charming country home being engulfed by floods.

Wary of the dangers posed by climate change and a history of disastrous flooding in this pretty part of Oxfordshire, an hour's drive from London, the couple have opted for a home built half a meter off the ground on 27 steel pillars.

"It's always been a dream to build this house," said Joanna O'Callaghan.

"It was clear that we had to build up above the flood plain."

Their home contrasts with the mostly red-brick, wooden-beamed houses that dot the area of picturesque villages, castles and hills, which attracts city dwellers on weekends, like Prime Minister David Cameron, who owns a home nearby.

Outside, the home is clad in timber panels for aesthetic effect and to improve insulation.

The interiors are a sleek marriage of form and function, giving the dwelling a Scandinavian feel.

But the key feature of the house, built in 2014, is a design that should spare the couple from floods that have affected homes in the area in recent years.

"All our neighbors can remember the big floods of summer 2007 when this whole garden was flooded," said Joanna, who is in her late fifties.

"I think we are sufficiently raised up here to prevent any floodings."

The recent history of the island nation, where nearly one in five houses is threatened by floods according to real estate experts, is marked by tragedies caused by deluges.

In 1953, floods in eastern England and around the Thames Estuary left more than 300 dead, and in the winter of 2013-14, thousands of homes were flooded as a result of flooding caused by historic rainfall.

"This means that an event that would have happened on average every 100 years in a world without human-induced greenhouse gas is now approximately expected to happen every 70 years," she said.

Hosted by the University of Oxford, Otto's organisation uses the personal computers of thousands of volunteers to simulate a supercomputer capable of generating complex climate models.

Faced with the risk of flooding, Martin and Joanna have chosen a home designed to dodge the deluge.

But Baca, the company that designed their house, has another trick up its sleeve -- an amphibious home that floats with the floodwaters.

Located on the banks of the Thames in the town of Marlow, eastern England, the house is based on the simple principle of buoyancy: a body immersed in a fluid experiences a force vertically directed from below.

Specifically, the house, the first of its kind in the UK, is made from a mobile unit installed in a wet dock and can slide vertically on four pillars.

The structure remains connected to utilities through flexible cables for water, electricity and the internet.

"The ground water within the base is linked to the height of the river. So as the river rises, the ground water inside the wet dock rises," said Richard Coutts, an architect at Baca.

"In the event of a flood this building is designed to travel over two meters," he said, adding jokingly: "It can withstand a biblical flood event."

These flood-resilient buildings are still a rarity in Britain, but there is momentum to meet the challenges posed by climate change by "making space" for water, Coutts said.

"British policy was to build flood defenses, barriers," he said.

"If we keep building barriers, at some point mother nature will win."