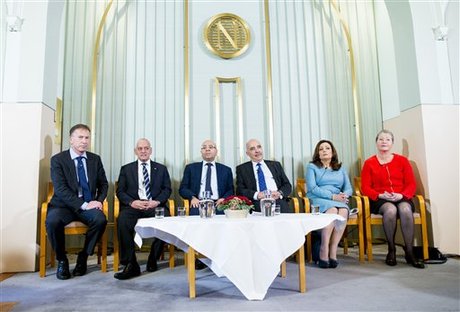 The Nobel Peace Prize was on Thursday presented to a group of four organizations that saved Tunisia's transition to democracy through dialogue, a method the laureates are keen to see applied in Syria and Libya.

"This year's prize is truly a prize for peace, awarded against a backdrop of unrest and war," the head of the Norwegian Nobel Committee Kaci Kullmann Five said at the formal award ceremony in Oslo, held in the presence of Norway's King Harald and under tight security amid the threat of a jihadist attack.

"We live in turbulent times. In North Africa, the Middle East and Europe, millions of people are fleeing from war, oppression, suffering and terror," she said.

"If every country had done as Tunisia has done, and paved the way for dialogue, tolerance, democracy and equal rights, far fewer people would have been forced to flee," she said.

The National Dialogue Quartet, made up of four civil society groups, helped save Tunisia's transition to democracy at a sensitive moment in 2013 when the process was in danger of collapsing because of widespread social unrest.

The group orchestrated a lengthy and thorny "national dialogue" between the Islamists of the Ennahda party and their opponents.

"Its work has led to a better platform for peace and non-violent resolution of conflicts. This is a story about building strong institutions to ensure justice and stability, and demonstrating the will to engage in dialogue and cooperation," Kullmann Five said.

The Quartet is made up of the Human Rights League, General Labor Union (UGTT), the Confederation of Industry, Trade and Handicrafts (UTICA), and the Order of Lawyers.

"Arms, in the end, only lead to destruction," Abdessatar Ben Moussa, head of Tunisia's Human Rights League, told AFP in an interview just hours before the award ceremony.

"In Libya for example, there is now a certain dialogue... (The situations) in the neighboring countries need to be resolved through dialogue with civil society, with political society, and of course putting aside the terrorist factions," he said.

In honoring the Quartet, the Nobel Committee shone the spotlight on Tunisia as a rare success story to emerge from the Arab Spring, the movement of popular uprisings that started in the country.

While uprisings in neighboring Libya, Yemen and Syria have led to war and chaos, and to the return of repression in Egypt, Tunisia successfully adopted a new constitution in January 2014 and held democratic elections at the end of last year.

But the democratization process remains fragile. Authorities have declared a state of emergency for the second time this year after a suicide attack on a bus belonging to the president's security entourage killed 12 people on November 24, for which the Islamic State (IS) jihadist group has claimed responsibility.

Ben Moussa said he was "very worried because each time there's a terrorist act, some voices... say that if there's terrorism, you have to put human rights aside."

Last week, Amnesty International expressed concern over the subsequent wave of arrests and detentions by the security forces, saying it was "a troubling sign that the authorities are reverting to repressive and abusive measures".

Two other major attacks had rocked the country before last month's bus bombing: in March, 22 people were killed at the Bardo Museum in Tunis, and 38 tourists were killed in a beach resort massacre in June.

A U.N. working group has meanwhile estimated at 5,500 the number of Tunisians who have left to fight in Syria, Iraq and Libya, making the country one of the world's biggest jihadist breeding grounds.

The Tunisian economy has been hard hit by the jihadist attacks.

The tourism industry accounted for about seven percent of the country's economy and some 400,000 jobs were directly or indirectly linked to the sector, but it has taken a nosedive since the beach massacre.

At the end of October, the number of hotel nights registered in the country had plunged by 60 percent from the previous year, official data showed.