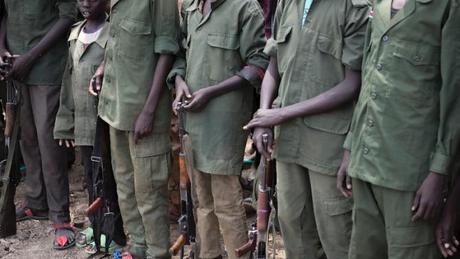 Two years since South Sudan's civil war broke out on December 15, 2013, at least eight ceasefires and power-sharing deals have been agreed and broken.

President Salva Kiir and rebel leader Riek Machar have repeatedly accused each other of breaking the deals but say they remain committed to the current peace accord, signed in August, despite missing every listed deadline.

- 2014 -January 23: Celebrations as Kiir and Machar sign their first ceasefire, agreed in Ethiopia and mediated by East Africa's regional IGAD bloc. It is broken shortly after.

May 9: Kiir and Machar pray together, as mediators in Addis Ababa hail a deal "ending the war."

August 25: Amid sanction warnings, Kiir and Machar ink another ceasefire in Addis Ababa, along with a deal to forge a unity government within 45 days.

October 20: In the Tanzanian town of Arusha, Kiir and Machar accept "collective responsibility" for the war, and call again for peace.

November 8: An "unconditional, complete and immediate end to all hostilities" is agreed by the rivals in Addis Ababa. It lasts a few hours.

- 2015-January 21: Kiir and Machar promise to make a "public apology" for the war and recommit to a ceasefire.

February 1: Another ceasefire commitment, and a deadline set for March 5 to agree a final peace deal and establish a transitional government.

June 27: Kiir and Machar meet for five hours in Kenya, but sign no deal.

August 26: Under intense international pressure Kiir signs a peace deal he calls a "reward for rebellion". Machar signed it on August 17.

October 03: Kiir undermines a fundamental pillar of the power-sharing deal by ordering the number of regional states be nearly tripled.

November 24: The deadline for a rebel delegation -- including Machar -- to return to Juba and begin work as part of a "transitional government of national unity" is missed.

December 15: Low level fighting continues in northern and south-western parts of the country.