More Firepower at Russian Base as Bombers Pound Syria 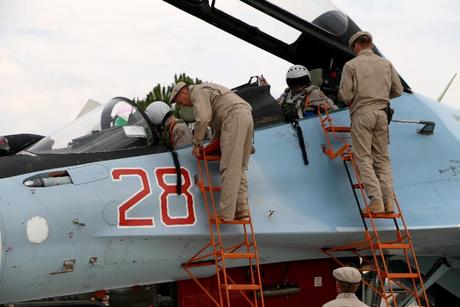 A fully armed Sukhoi-24 bomber roared deafeningly down the runway at Russia's Hmeimim base in Syria and took off into the sky over the war-torn country.

Within a few minutes another jet laden with bombs hurtled along the tarmac after it and followed up towards the clouds. Then another, and another.

"From the time the pilot gets the order to when the plane takes off and the target is destroyed -- all that is normally completed in just some thirty minutes," spokesman Major General Igor Konashenkov said as he looks at another plane gearing up for a mission.

"If the objective is in Deir Ezzor province then it can take some 25 minutes to get there, if it's near Idlib, then just 10," Konashenkov told AFP as part of a tightly controlled press trip to Hmeimim organized by the defense ministry in Moscow.

Almost three months after Russia started its bombing campaign in Syria at the request of President Bashar Assad there seemed little sign of it letting up at Moscow's sprawling facility deep in the strongman's heartland.

Russia's military said Wednesday its jets had carried out 59 sorties and destroyed some 212 targets in the past 24 hours, adding to the roughly 9,000 training camps, munition depots, command posts and oil refineries they claim to have taken out overall.

In a sign that it remains in an unrelenting mood, Moscow has also bolstered its firepower at the base to protect its aircraft over Syria after a Turkish F-16 shot down one of its fighter jets along the Syrian border on November 24.

At one end of the runway the radars of the most modern air defense system Russia's army possesses -- the S-400 -- rotated next to some half-dozen vast missile firing tubes.

President Vladimir Putin ordered the system to Syria in the days after the incident, and the defense ministry claims they rushed them over in hours.

"After they shot down our SU-24 plane the command was given and they were set up as quickly as possible," the commander of the air defense system told AFP, without giving his name.

The system can track some 300 targets and shoot down around three dozen simultaneously over a range of hundreds of kilometers, the military said.

"They are now permanently working on alert to provide full cover to our aviation flying over the whole of Syria and some of the Mediterranean," the commander told AFP.

Russia says its air campaign in Syria is aimed at destroying Islamic State jihadists and other terrorist groups in the war-torn country.

But members of a U.S.-led coalition targeting IS separately insist Russia is mainly hitting groups fighting Assad, and NGOs and observers have alleged civilian casualties.

During the press tour, the Russian officials were desperate to show off the weaponry they insist is only hitting the targets intended.

Technicians winched bombs and missiles onto Sukhoi jets as helicopters whirred overhead to monitor the perimeter of the base that officials will only acknowledge contains "a few thousand" servicemen.

"There have not been any mistakes in our strikes," spokesman Konashenkov insisted.

"All our planes are equipped with the most modern targeting equipment," he said.

For those living in the surrounding region -- an Assad stronghold that has largely been spared bloodshed throughout the nearly five years of fighting in Syria that has cost some 250,000 lives -- there was no doubt what some felt about the arrival of the Russian might.

"Russia, Putin -- mwah," said Mohammed Antar, a resident of Latakia who now drives a bus on the Russian base, blowing a kiss with his fingers.

"God is greatest," he sighed with awe as a Russian fighter took to the sky in front of him.

Russia's military said the nearest frontline has been pushed back from some 25 kilometers from the Hmeimim base to about 50 kilometers.

"For now life in here is okay, is safe," Antar told AFP with the help of a Russian military translator. "That is thanks to the Russians."