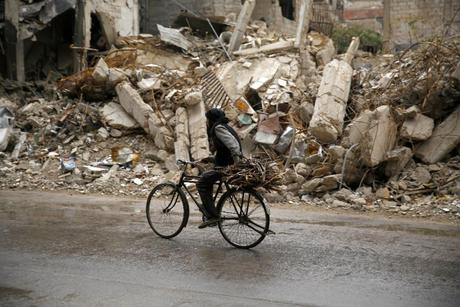 After years of waning influence, Russia and Iran made a dramatic comeback in the Middle East in 2015 as they threw their support behind Syria's embattled President Bashar Assad.

A decades-long backer of the Syrian regime, Moscow dramatically raised the stakes this year by deploying its air force to bomb rebels fighting Assad's army.

And after years of isolation and crippling sanctions, Tehran returned as a regional power with a seat at Syria's peace talks, denoting growing international legitimacy.

But analysts question whether Russia and Iran's investments will ultimately earn them leading roles in the region, or if they will get bogged down in the Middle East quagmire.

"The resurgence of Iran and Russia is obvious, and their interventionism is increasingly unabashed," said Karim Bitar, head of research at the Institute for International and Strategic Affairs.

"They are looking to fill the void left by the American retreat" from the region, he added.

This interventionist streak is most prominent in Syria, where the nearly five-year-old conflict has worn down government troops.

After several years of providing financial aid and military advisers, Moscow launched an air war in support of Assad in September.

The strikes have targeted a patchwork of armed forces hostile to the regime, ranging from U.S.-backed rebels to jihadist groups including the Islamic State organisation.

- 'The West cheated us' -With the collapse of the Soviet Union in 1991, Moscow lost its influence in the Middle East -- where it had invested time, energy and financial resources for years -- seemingly overnight.

In May 1994, it watched powerless as the Soviet-backed Democratic Republic of Yemen buckled under pressure from the Saudi-allied north.

Less than a decade later, Russia's influence in Iraq dimmed with the ousting and death of Saddam Hussein following the U.S.-led invasion.

History seemed to repeat itself in October 2011 with the UN-sanctioned military campaign in Libya against Russia ally Moamer Kadhafi.

"The West cheated us. We will never forgive them for unilaterally using the UN resolution to take over Libya. Never will we let them take over Syria," a high-ranking Russian diplomat in Damascus told Agence France Presse.

Syria is Moscow's last foothold in the Middle East, and its loss would reduce Russia to a second-rate power.

The "inflexibility" of Russia's stance on Syria, Bitar said, stems partly from a desire to protect its strong bilateral ties with its last "client state" in the Middle East.

But it also seeks to present itself as a protector of the region's Christian minority and to act on a policy of "revanchism after being humiliated since 1989," he added.

"Russia's national interest has pushed it to act in the Middle East, so that it doesn't have to fight the fire (of Islamist ideology) near our borders," said Ajdar Kourtov, head of the National Strategy Problems Journal, which is close to the Kremlin.

"Russian leaders aspire to restore Russia's rank in international politics, a rank comparable to what the Soviet Union had," added Kourtov.

- 'Painful consequences' ahead? -Moscow is already beginning to reap the benefits of its intervention in Syria.

Russia has developed links with Egypt, Jordan and Gulf countries, and has secured a central role in finding a political solution to Syria's crisis.

Iran, too, has invested heavily to protect its ally in Damascus and has been given a role in international peace talks on Syria for the first time.

It has dispatched the elite Revolutionary Guards as well as the allied Shiite Lebanese militia Hezbollah to bolster Assad's forces and push back rebel advances across Syria.

Iran's regional influence has surged since the signing of a landmark nuclear deal with world powers under which economic sanctions will be rolled back.

In a bid to eclipse regional rival Saudi Arabia, Iran has also consolidated its influence in Iraq and Lebanon through Hezbollah.

"Russia and Iran started to work together to prevent the region from completely collapsing," said Mohammad Marandi, dean of world studies at the University of Tehran.

"We will see, in the coming weeks, other actors, other countries, moving closer toward the Iranian-Russian position regarding extremism and the role extremism is playing," Marandi added.

But the game is far from over.

Tehran and Moscow, Bitar warns, "could be adversely affected as not a single intervention in the Arab world has ended without unintended, and often painful, consequences for those who dive headfirst into this mess."