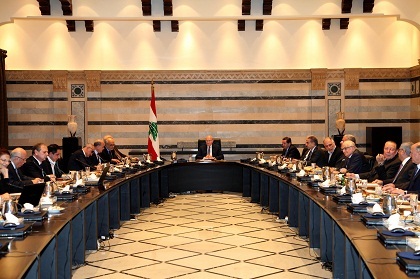 The cabinet on Monday approved a plan to send garbage abroad as a “temporary” solution to the waste disposal crisis, despite the objections of the ministers of the Free Patriotic Movement and the Kataeb Party.

“We have overcome a huge burden that was pressuring Lebanon and the Lebanese,” Prime Minister Tammam Salam announced after the session.

“The garbage exportation solution was reached amid procrastination and obstruction in the country and amid a tense political situation. It was reached after a lot of disputes and disagreements that led us to the current situation,” Salam added.

“This is a temporary and transitional solution and I hope it will be a lesson to everyone on the need to avoid political bickering … We are amidst organic, household and municipal waste, but we are also suffering from 'political garbage',” the PM said.

Noting that the country needs a “sustainable waste management solution,” Salam pointed out that Lebanon must “use garbage to produce electricity.”

The resolution was passed despite the objections of the ministers Elias Bou Saab of the FPM and Sejaan Qazzi and Alain Hakim of Kataeb. Kataeb's minister Ramzi Jreij voiced reservations.

Foreign Minister Jebran Bassil of the FPM did not attend the session.

“Bou Saab told Salam that passing such a decree despite the objections of two main parties must not become a rule that governs cabinet's work or a reason to change the current mechanism,” MTV said.

According to Agriculture Minister Akram Shehayyeb, exportation will cost $212 per ton.

“During the cabinet debate, Salam intervened several times, demanding decisiveness and criticizing the rejection of all solutions,” LBCI television said.

Prior to the session, Finance Minister Ali Hassan Khalil told reporters that he does not support “hiking gasoline prices” to fund the garbage exportation plan.

Bou Saab for his part noted that he would raise “many questions about the funding sources, especially regarding public funds and the municipalities' revenues.”

The session was accompanied by a protest outside the Grand Serail by civil society activists.

Denouncing the manner in which the government has handled the waste management file, the activists warned authorities against “approving the exportation of garbage or hiking gasoline prices.”

“This would mean that corruption has not ended,” the activists noted.

They had long called for an eco-friendly solution to the garbage crisis that involves more recycling and composting to reduce the amount of trash going into landfills and a bigger role for municipalities.

Lebanon has been suffering from a waste management crisis since July when the Naameh landfill that receives the trash of Beirut and Mount Lebanon closed.

The government's failure to find alternatives led to the piling up of garbage on the streets and in random locations, which raised health and environmental concerns and sparked unprecedented street protests against the entire political class.

and the most ironic part is that this would still be an improvement compared to what sukleen did during 15 years, pocketing that money while dumping the trash right on the shores.

sure as it is sukleen who is in charge of ...Exporting the trash LOLLLLLLLLLLL

"sure as it is sukleen who is in charge of ...Exporting the trash LOLLLLLLLLLLL"
you're being a little hysterical, and not making any sense. try again.

how can i not forget something i never knew? any evidence on how hariri's company filled the pockets of m8 politicians?

"sure as it is sukleen who is in charge of ...Exporting the trash LOLLLLLLLLLLL"
you're being a little hysterical, and not making any sense. try again.

how can i not forget something i never knew? any evidence on how hariri's company filled the pockets of m8 politicians?

and why this irrelevant attempt at diverting the subject? seems like dodging the blame for you m14 masters and somehow trying to turn it into an accusation against m8 is more important than the trash crisis for you. you're typically the reason we're in this situation.

in case your EMPTY brain failed to read what i wrote, i'll copy it again for your idiot brain to see:

sure i m siding with one camp while criticizing ALL of them...

pityful moooowaten who can only see what he wants to see... typical definition of an IDIOT!

when the crooks are known, with their companies established in plain sight plundering the country, trying to put their opponents in the same bag as them is defending them. simple as that. either stick to pointing your finger at the culprits and only the culprits, or try to make them seem "just like the others" to disculpate them.

in case you failed to see: ALL the lebanese politicians are culprit yet you support them ...which makes you accomplice of this failed system...

you know why? because they too benefit from this chaos.... and yet you support them! LOLLLLLL

i dont support any politicians, i support the resistance and everyone who supports the resistance, because it is the one best hope of a proud free future for lebanon and the region.

Lebanon could have made MONEY out of the trash like any other civilized country does...
but our crooks ruling this country prefer making the Citizen pay for its export and make money to fill their bank accounts....

they crushed the protests, threatened the protesters only to save their businesses while sheep still vote for those idiots...

and MEDIA stay silent, accomplice of the robbing of the country!!! NO media campaign to support environmentalists who have LONG TERM solutions, no media campaign to push politicians to look for a long term solution by building recycling plants and making compost out of organic trash... 90% of our trash can be recycled and valued!!!!

funny how you try to make people believe that only M14 is in charge of everything and that M8 has nothing to do with state issues...
is M8 soo weak they cannot do anything? LOLLLLLLL

i didnt say m14 is in charge of everything, but sukleen = averda = hariri and that is a fact you cannot evade, no matter how many L's you add to your hysterical LOLs

so what? sukleen is hariri but what did M8 do to change things and set up a garbage plan that has long term solutions? nothing...just like you are doing = bark like dogs...

criticize sukleen all you want and true sukleen is just stealing lebanese citizens but also criticize your camp for idleness and benefiting from this system!

tfeh on you and all the sheep that follows the crooks we call lebanese politicians...

you call yourself "resistant"? and what does your beloved party do improve lebanese environment? what do they do to the daily lives of lebanese citizens apart bring them wars? NOTHING

" what does your beloved party do improve lebanese environment? "

first think i can think of: keeping takfiris out. that's a big pile of trash that we dont have to worry about thanks to hezbollah :) now if you think the resistance should also be in charge of garbage collection and urban planning, please do say so, and petition the government to give them more portfolios than the the two token ones they have now.

"keeping takfiris out" like i said: nothing for the citizens only bring them wars... all you are good at but citizens problems? you do not give a shit about it....

"now if you think the resistance should also be in charge of garbage collection and urban planning, please do say so,"

you are either a party and act like so or you are not and stop whining you want more portfolios, hypocrit idiot....

if what you understood from my comment is that i wanted more portfolios, you're really dumber than i thought.
and yea, keeping takfiris out, preventing lebanon from being turned into a bloodbath does nothing for citizens eh? defending the land and freeing it from israeli occupation also was nothing for citizens eh? man you're so freaking dumb and hypocrite, that it is pointless to talk with you. bad faith upon insults upon bad faith.

keep focusing on wars, sure mooooowaten, more than on what can we do to improve lebanese economy and citizen welfare, and sure you will have a country that the whole world would envy us...and is already envying us... no efficient infrastructure, no economy, no good salaries, no proper envronment, no water, no future for the youth... sure that is what all your "resistance" propaganda brought to Lebanon... keep up the good job and Lebanon in a few years will be a desert for your resistance to play in!

noticed that all your speeches are on war with israel and war in syria? tell a lot about your way of thinking, but never you tackle the real citizens problems... just war war war...

good little virtual soldier you are....

what is hezbollah? a "resistance" then no hezbi member should be in parliament, neither in the gvt.... and strictly stick to their favorite games which is playing war games...

or a political party? then they should not bear weapons and have no army of theirs like all the other parties did...and OBEY the army

they are a party when it goes in their intersts

and a "resistance" when it suits them...

in both cases they are just hypocrits taking a country in hostage of their weapons.....

the resistance did resistance and it did it well, you want to blame it for all the failures of politicians that it had nothing to do with? go ahead, i dont care, but know that it's people like you who prevent this country of evolving.
the day you realize hariri took hundreds of billions to supposedly build the infrastructure but instead just filled his pockets and gave the heart of beirut to khaleeji is the day you'll know who to turn to to demand answers.

then stop calling your militia a political party and stop playing politics if their role is strictly war games... you want to have everything that is all...

if your militia is not a political party then it has NOTHING to do in parliament neither in the governments, but if you believe they should then why aren't they acting as such and "resisting" also to improve lebanon's welfare and economy? why aren't they doing anything to sue hariri then if they really give a shit about it? why don't they fight corruption with the same energy they fight israel?? they have the power and the means!!!

because they benefit from it too!!!

otherwise they would also put as much strength as they put in wars to improve the system as they call themselves "resistants"!

stop saying hezbollah are right and M14 is wrong while you participate to the chaos too.... assume it like a man and start criticizing them too for stealing the country!

till then, you are just a hypocrit as your party is...

so if they can't take on ALL the issues and fix the entire world they're not resistants? man wake up and stop running your silly childish mouth. do something instead of whining all day and then maybe i'll take you seriously.

yet you did not answer my question... a party or an army?

i guess it is too sensitive an answer as it will make you look like i said: a hypocrit playing on both sides when it suits you....