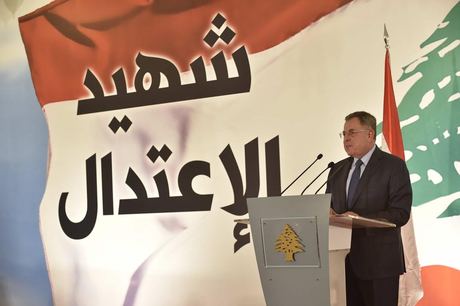 Al-Mustaqbal bloc chief ex-PM Fouad Saniora stressed Sunday that the March 14 coalition will remain united despite the differences that emerged over MP Suleiman Franjieh's presidential nomination, as he lamented that a probe into the 2013 assassination of ex-minister Mohammed Shatah has not made much progress.

“Shatah believed in the Lebanon of the state of law and equality and he called for the implementation of the Taef Accord,” said Saniora at a ceremony commemorating Shatah at the Mohammed al-Amin Mosque in downtown Beirut, which was attended by Lebanese Forces leader Samir Geagea and other March 14 leaders and officials.

He noted that Shatah's contributions “were effective in all the deliberations that led to the final text of (U.N. Security Council) Resolution 1701, the creation of the Special Tribunal for Lebanon, and the issues of the Shebaa Farms and the demarcation of the Exclusive Economic Zone.”

“The crime of Shatah's assassination has created a void that we have not been able to fill until the moment,” Saniora noted.

“We have not and will not change our goals and objectives and we will not stop our openness towards all our partners in the country in order to preserve civil peace. We will not back down on the slogans and objectives for which Shatah was martyred,” Saniora vowed.

Turning to Hizbullah's military intervention in neighboring Syria, the former premier said the March 14 forces will never approve of Hizbullah's involvement in the conflict, warning that the party's young fighters are entangled in “a cause that is not their cause.”

“Day after day, it is becoming evident that this is not the proper way to confront terrorism or protect Lebanon from it … This is not the right way to preserve the unity of the Lebanese and their civil peace or their relations with their Arab neighbors,” Saniora added.

As for the relations among the March 14 forces, the ex-PM underlined that “the differences of opinion that occurred or might occur in the March 14 coalition over specific issues cannot affect the core of the cause, which is related to Lebanon's existence.”

“The March 14 forces were and are still a national necessity today more than ever,” he said.

Addressing the issue of the presidential vacuum, Saniora called for the speedy election of a president who would “preserve the Constitution and Lebanon's independence, unity and territorial integrity.”

“The March 14 forces will remain, regardless of any disagreements, because their cause is related to Lebanon's fate. Nowadays we have three missions – electing a president, protecting Lebanon from the destruction that is surrounding us, and running public affairs in a manner that achieves welfare, reform and renaissance,” Saniora added.

Lamenting lack of progress in the probe into Shatah's murder, the ex-PM said: “Is it reasonable that the investigations in the case of Shatah and his comrades have not made any progress although the security agencies have made achievements in the fight against terrorist groups and the Israeli-linked spy cells?”

Shatah was killed in a bombing in downtown Beirut on December 27, 2013.

Hariri had noted in the wake of the blast that the assassins are the same ones who murdered his father, former PM Rafik Hariri, on February 14, 2005.

The Special Tribunal for Lebanon tackling the 2005 murder has accused five Hizbullah members of being behind the crime.

Hizbullah has refused cooperation with the court and dismissed it as a U.S.-Israeli scheme aimed at tarnishing its image, vowing that the five accused will never be found.

Shatah really looked like a suni fanatic, nothing to be compared to secular, progresist and modern nasrallah...
May he rest in peace, someday justice will be done...

is secular like the boby of Mecca in Lebanon, Hariri!!

But not as much secular as nasslarah..i get ur point..
Now u can get back to medieval europe and inquisition time tric...
U r not getting any smarter man...

iu are a formated jewish mind...ataacked the Catholics because of the Inquisition!!!??? why the jews dont remember what they donne to the Catolics with the protestants in Europe, in the same period!!! yes, the jews are always the vitims...

U studied history in opus diei sumer camp man??
As i said before u r not getting any better man... Go have some rest, a glass of porto or something...

atacked the Catolics with the Inquisition!!?? only the jews do that...that dogs that promoted a portuguese cristhian genocide!!

march 14 controls the justice ministry, the interior ministry, and the isf, and they "decry the slow probe"? how hypocrite can they be? whining about their own incompetence and failure to take their responsibilities.

LOL you can't be for real dude. please go take your meds, then check your facts, then kill yourself. thanks

Shatah was a great man.
He was a man of true dialogue, advocate for the living together, understanding, tolerance, respect for others and a great patriot.

advogate the submission of the Cristians to the Islam!! great Patriot...

Nassi changed his name to christian, haven't u heard humble?
Tell us all about it tric...
A complete Retard... It's sad man, get some argumentation, really make some effort man...

Tric Trac is a Muslim-Cristhian converted to Iranian Houthi and recently to Takfiri-Nusra awaiting his final revelation to Porto-Alawito-Kurdo-Druzo-Zionisto-Ebolisto-Satanico culmination.

.some efforts!!!?? oh my friend...the islamic population in region increasing...jewish population increasing....only the cristhian polpulation are decreasing...and the vitims are or the "moderate" islamics or the jews...please!!!... in Lebanon the Islamics, the moderate islamics, are stollen the political power to the Cristhians...and the Army of Lebanon assisting in silence!! after what is happenning in the region to the Cristhianity...

Man go on the streets of lisbon and preach for some new crusade...
Are u really that retarded man..

"Man go on the streets of lisbon and preach for some new crusade...
Are u really that retarded man.."
.
my friend, i only preach save the Cristhians in Levant from the hands of Mecca and Jews!...

Ok just a question in ur argumentation u always omit hezbollah and iranian ayatollah millicias, are those christians undercover man?
Even in ur secterianism u r kind of lost.... Can u clear our thought on that issue please?

“The March 14 forces will remain, regardless of any disagreements, because their cause is related to Lebanon's fate. Nowadays we have three missions – electing a president, protecting Lebanon from the destruction that is surrounding us, and running public affairs in a manner that achieves welfare, reform and renaissance,” Saniora added.
.
destroy the political influence in Lebanon of the bigguest Cristhian block is the main objective Al-Mustaqbal bloc ! nothing more...

like aoun is the puppet of the islamist party? LOL

Hezbos islamists????
This should explain the official name of "ISLAMIC redistance".... But tric never thought of that, to focus on the meqqa...

By the way what happened to abou addas? Any news?...