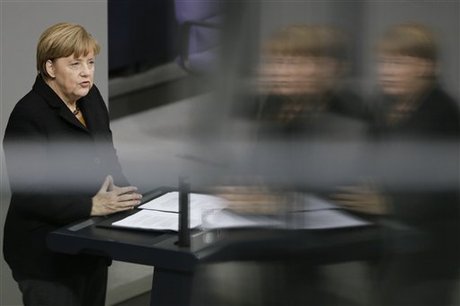 In a year of crises for Europe, from the Ukraine war to Greece's debt turmoil to the historic refugee influx, Germany's Angela Merkel emerged as the continent's de facto leader, drawing more praise and fire than ever.

Whether spearheading EU diplomacy with Moscow, bargaining with Athens over tough bail-out terms or responding to the world's biggest refugee wave since World War II -- Merkel was in the middle, again and again.

At a time of growing uncertainty and division in Europe, the pragmatic quantum chemist whom Germans call "Mutti", or mummy, preached fiscal rectitude and humanitarian principles, often drawing a mixed response.

Her unusually bold move to throw open Germany's doors to Syrian refugees has particularly battered her long-stellar poll ratings at home, and left the leader of Europe's top economy isolated on key issues in the 28-member EU.

"2015 has been an incredible year, hard to comprehend really," said the 61-year-old chancellor, who is not usually given to hyperbole, at a congress of her center-right party this month.

That was quite a statement for the Protestant pastor's daughter, who grew up behind the Iron Curtain and lived through the fall of the Berlin Wall a quarter-century ago.

The rise of Germany's influence during Merkel's decade in power has often unsettled European neighbors.

Italian Prime Minister Matteo Renzi, more politely, stressed that while he had esteem for Merkel, "Europe has to serve all 28 countries, not just one."

Merkel won over some of her harshest critics with her decision in September to open the doors to a record wave of refugees who were heading in, many on foot, from Budapest.

The country that once sent rail carriage-loads of people into concentration camps was now cheering as trains arrived packed with refugees from war-torn Syria, in moving TV footage seen around the world.

"We can do this," has been Merkel's mantra ever since, as she has sought to instill courage in a country scrambling to welcome the one million newcomers who arrived this year.

Merkel was hailed as "Mama Merkel" by refugees who flocked to take selfies with her, and pictured as a Mother Teresa figure on the cover of Spiegel magazine.

In rare unanimity, media organizations including Agence France-Presse, Time magazine and the Financial Times declared the long-time "Queen of Europe" the world's most influential person of 2015.

New York Times columnist Roger Cohen wrote that "she has become a towering European figure, certainly the equal of such postwar German giants as Konrad Adenauer, Helmut Schmidt and Helmut Kohl -- perhaps even surpassing them".

Even Greece's left-wing former finance minister Yanis Varoufakis, long the arch-nemesis of Berlin, told news weekly Stern that "maybe, if I was German, I would vote for Merkel".

Many Germans, however, now have doubts, fearing that Merkel, their trusted guarantor of stability, is plunging the country into chaos.

Polls point to growing fears about the influx of mostly Muslims, a right-wing populist party has been gathering steam and there has been a spike in racist hate crimes.

"In general, Merkel and her work are still very highly regarded, but on the refugee crisis a majority think she is pursuing the wrong policy."

Merkel's plan to avoid a million more arrivals next year is based in large part on convincing other EU members to accept more refugees.

Yet the response so far has ranged from deafening silence to howls of protest.

At the party congress, Merkel conceded that the refugee influx -- "a rendezvous with globalization" -- presented an "enormous" task and would change the country forever.

"It is a historic challenge for Europe, and I say we want Europe to meet this challenge," she said, to thundering applause. "And I am convinced it will."

Niedermayer said that Merkel, in her best speech so far, had "bought herself a few months, but not more" while voters and her own party base would likely grow more impatient.