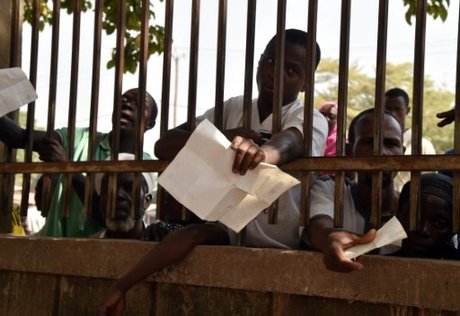 Here is a snapshot of events since a March 2013 coup in Central African Republic, which holds presidential and parliamentary elections Wednesday.

On March 24, rebels from the Muslim-dominated Seleka coalition seize the presidential palace in the capital Bangui. Francois Bozize, who has been in power for 10 years, flees.

A day later, Seleka leader Michel Djotodia suspends the constitution and says he will rule by decree until elections are held, becoming the first Muslim president of the predominantly Christian country.

In early September, around 100 people are killed in two days of fighting between Seleka combatants and Christians loyal to Bozize around Bossangoa, 250 kilometers (155 miles) northwest of the capital.

Although Djotodia disbands the rebels, some of them go rogue, sparking months of murder, rape and pillage and prompting Christians to form vigilante groups -- the "anti-balaka" -- in response.

- On December 5, France launches Operation Sangaris in its former colony under a U.N. mandate, doubling the force it already has in and around Bangui.

Dozens are killed in bloody clashes between Seleka and anti-balaka militias.

On January 10, Djotodia resigns under intense international pressure over his failure to end the violence, after 1,000 people were killed in the previous month alone.

On January 20, the transitional parliament picks the mayor of Bangui, Catherine Samba Panza, as interim president.

On September 15, a new U.N. mission known as MINUSCA takes up the baton from the African MISCA force, which was backed by French and European troops.

On January 8, a U.N. commission of inquiry concludes that both sides in the fighting have committed crimes against humanity, including ethnic cleansing, but says the international intervention has helped avoid a genocide.

The commission, set up in January 2014, puts the death toll in the conflict at more than 6,000 and says the priority should be to end impunity.

On September 26, a new upsurge of clashes begins in the capital, sparked by the murder of a motorcycle-taxi driver in the Muslim-majority PK-5 neighborhood.

Violence on an almost daily basis between ex-Seleka and anti-balaka militias has left more than 100 dead in Bangui since late September.

On November 29-30 Pope Francis visits Bangui, saying Christians and Muslims are "brothers", and urging them to reject hatred and violence.

Voters overwhelmingly back a December 13-14 constitutional referendum, clearing the way for parliamentary and presidential polls.