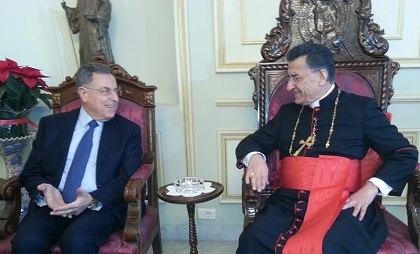 Head of the Mustaqbal parliamentary bloc MP Fouad Saniora stressed on Monday the need to elect a new head of state, saying that the presidency is not a strictly Christian affair.

He said after holding talks at Bkirki with Maronite Patriarch Beshara al-Rahi: “We urge against taking rushed stances over the elections.”

He made his remarks in wake of media reports that said Lebanese Forces chief Samir Geagea is leaning towards the nomination of his rival Change and Reform bloc leader MP Michel Aoun as president.

“The election of a head of state is a Lebanese issue, because the president represents all the people and he enjoys their consensus,” added Saniora.

“The president should be a figure of unity, not division,” he stressed.

“He should bolster coexistence among the Lebanese and the regional developments only highlight Lebanon's role as a country of coexistence,” he noted.

“The longer it takes us to elect a president, the greater the repercussions of regional developments will be on us,” warned the lawmaker.

He added however that more internal consultations are needed to ensure the success of the presidential polls.

Franjieh's bid for the country's top Christian post is backed by al-Mustaqbal movement that is led by ex-PM Saad Hariri.

No to traitors as president. Full stop.