Curfew in Tunisia City after 14 Protesters Hurt by Tear Gas 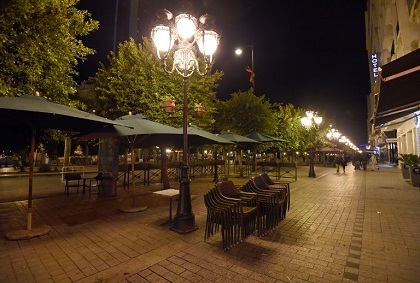 Authorities later imposed a curfew on the impoverished city, where tensions have been high since Saturday when a young unemployed man suffered a fatal electric shock during a protest.

"Work is a right," chanted those at Tuesday's demonstration, who numbered 500 according to an AFP correspondent and twice as many according to an interior ministry official.

"Some threw stones while others climbed on the roof of the governor's office. Police dispersed them by firing tear gas," said the ministry official.

Kasserine's governor, Chedly Bouallegue, said 14 people were hospitalized "all of them for slight injuries."

Protesters were seen setting alight tires which they used to block one of the main roads of the city, as the army was deployed outside the governor's office.

The interior ministry said calm was restored later in the day.

But in the afternoon the ministry announced an overnight curfew would be imposed on Kasserine from 6:00 pm until 5:00 am starting on Tuesday, but it was not clear if it would be extended.

Tensions have run high in Kasserine since Saturday, when Ridha Yahyaoui, 28, climbed atop a power pole near the governor's office and was electrocuted.

He was protesting after his name was removed from a list of hires for public sector jobs.

His death sparked anger on the streets of Kasserine where on Sunday dozens of residents set tires ablaze, and further afield in the capital Tunis where up to 200 people took part in a protest on Monday.

A provincial official has been sacked following Yahyaoui's death.

Tunisia, which has been plagued by high unemployment and poverty, has struggled to revive its economy since the 2011 revolution that toppled veteran president Zine El Abidine Ben Ali.

Unemployment now stands at more than 15 percent and 32 percent among holders of university degrees, and Kasserine is one of the poorest regions of the North African country.