Austria to more than Halve Asylum-Seeker Numbers in 2016 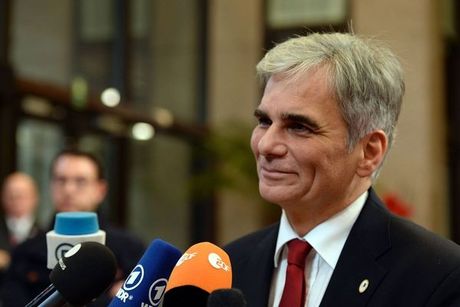 Migrant hotspot Austria said Wednesday it would seek to cap the number of asylum-seekers at 37,500 in 2016, less than half of the 90,000 claims received last year.

"We can't take in all asylum-seekers in Austria," Chancellor Werner Faymann said after a national asylum summit in Vienna.

"We have fixed this number as a guideline... We will study what happens when this limit is reached," Faymann noted.

The four-year cap, which represents 1.5 percent of Austria's 8.5 million population, was an "emergency solution" serving as a "wake-up call for the EU", the chancellor added.

The move is a further sign that the government is hardening its stance in Europe's worst refugee crisis since 1945.

The small Alpine nation has become a key transit country for hundreds of thousands of migrants and refugees entering the European Union (EU).

In 2015, more than one million people made the perilous journey to Europe -- nearly half of them Syrians fleeing a civil war that has been raging for nearly five years.

In Austria, the influx has contributed to a surge in popularity of the far-right and sparked tensions within the ruling centrist coalition between Faymann's Social Democrats (SPOe) and the conservative OeVP party.

Until recently, Faymann had resisted the OeVP's call for limiting asylum-seekers' numbers.

But the coalition showed a united front on Wednesday, with both sides agreeing that a "drastic reduction" was needed.

The announcement comes in the same week as the launch of tougher border controls and the expected completion of a fence on Austria's main frontier crossing with Slovenia.

The 3.7-kilometer (2.3-mile) barrier -- set to be ready by Friday -- will be the first of its kind inside the EU's passport-free Schengen zone.

Austria also signaled last week that it would follow neighboring Germany's lead and begin turning back any new arrivals seeking to claim asylum in Scandinavia.

Berlin's clampdown started after Sweden and Denmark tightened their borders in early January.