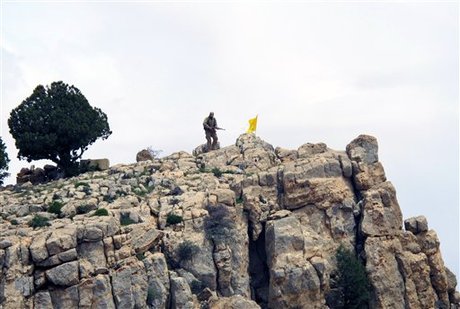 Negotiations are underway between Hizbullah and al-Qaida-linked al-Nusra Front on the release of three Hizbullah members taken captive in Syria’s Reef Aleppo around two months ago, al-Akhbar daily reported on Thursday.

The newspaper said that the Nusra leadership has tasked Abou Malek al-Talleh, the so-called emir of al-Nusra in Qalamun, with carrying out the negotiations.

The talks are focusing on the release of the Hizbullah fighters in return for the party to set free several al-Nusra gunmen taken captive by the party or arrested by the Lebanese authorities, it said.

The terrorist group is also trying to pressure Hizbullah to ask the Syrian army to withdraw from a village or two towns that are under its control in the Qalamun region, said the report.

A Qatari mediator is holding talks with the two sides to speed up the negotiations process, it added.

I thought Hezbollah said it does not negotiate with other and similar terrorist organizations.

please show me where they said that. you guys are experts at making up BS and then believing it yourselves.

again, please show me where they said that. you guys are experts at making up BS and then believing it yourselves.

pff... there are hundreds of articles momo... just look it up!

hahahah you really are a funny one mate. if the best you could find was two articles from saudi/gulfy papers making unfounded, unsubstantiated claims about hezbollah supposed positions than you're basically confirming what I was saying: this rubbish propaganda line is fabricated from start to end.

and the funniest thing is that one of your "authors" doesnt even know what takfiri means (he translates it "[apostates]"). hahahah man you can't be serious when you give me such sources.

Ebola has all the rights....guess who gave them the Christian support they needed to become "the State"???

The same should apply for you.

you know why they dont lebjack? because they know this would lead to immediate and massive reprisals. remember how they picket up the organizers of the dahiyeh attacks in the middle of rebel zones in syria?

did that happen in the last chuck norris movie? what a troll

yeah the terrorist militia heroes went in there and got captured...

negotiation between terrorists, nothing to do with Lebanon.....

The criminal sectarian organization hides its casualties and its prisoners.

so just because you claim they are lebanese citizens ( which they are not ), they should get away with their murderous acts. Tell that to the families of the syrians they are killing.