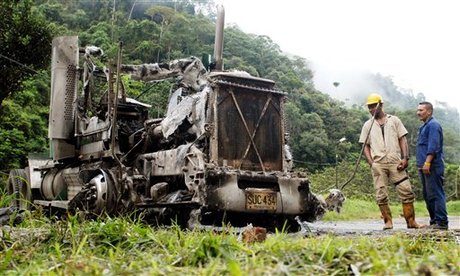 Colombia said Thursday it has freed 16 FARC guerrillas pardoned in peace negotiations with the leftist rebels, as the two sides move toward a deal to end their half-century conflict.

The jailed rebels, the first out of a group of 30 to be pardoned, were released in a goodwill gesture to reciprocate for a unilateral ceasefire declared by the Revolutionary Armed Forces of Colombia (FARC) in July, said the office of the government's high commissioner for peace.

The unilateral ceasefire has fostered "a reduction in violence and advances in the (peace) process," it said in a statement.

Under the terms of their release, the rebels -- nine men and seven women freed from two Bogota prisons -- must promise not to re-enter the FARC.

The FARC welcomed the move as a "positive gesture," but called on the government to also free 80 other rebels with health problems.

The peace talks in Havana have made several key advances in recent months, and the two sides have set a deadline of late March to sign a final peace accord -- though the FARC have warned that "substantial hurdles" remain.

Negotiators announced Tuesday that they have asked the United Nations to monitor the eventual end of the conflict and oversee the disarmament of the FARC.

The Colombian conflict, which has killed more than 220,000 people and displaced six million, has over the years drawn in right-wing paramilitaries, drug traffickers and several leftist rebel groups, of which the FARC is the oldest and largest remaining.

A rival rebel group, the National Liberation Army (ELN), has held exploratory talks with the government but has yet to join the peace process.