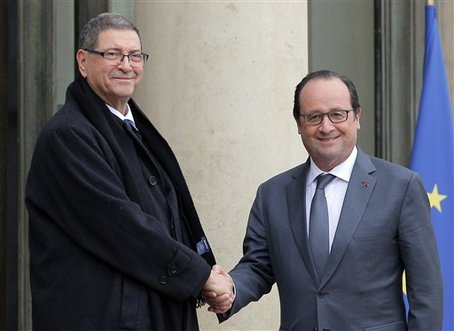 France will provide one billion euros ($1.1 billion) to Tunisia over the next five years as part of an economic support package, the French presidency said Friday.

"A major aspect of the plan aims to help poor regions and young people, putting the focus on employment," said the office of French President Francois Hollande following a meeting with Tunisian Prime Minister Habib Essid in Paris.

"Five years after the revolution, Tunisia has succeeded in its democratic transition but remains confronted by major economic, social and security challenges," Hollande's office said.

Essid warned for his part that joblessness could not be eradicated overnight, saying: "We don't have a magic wand."

Protests have broken out this week over unemployment and poverty, leading to the announcement of a nighttime curfew earlier on Friday, although Essid said the situation had been "brought under control".

Essid however decided to cut short his visit and return home.

"Tunisia, like France, is threatened and has been seriously affected by terrorism, because it made a choice for democracy," said Hollande's office.

"The president underlined that France is ready to reinforce its cooperation in the fight against terrorism."

French Prime Minister Manuel Valls will visit Tunisia by the end of the year, the statement added, as part of ongoing efforts to strengthen ties.

One of the first concrete proposals in France's aid package is a 60 million euro project to build a hospital in Tunisia's central Gafsa region.