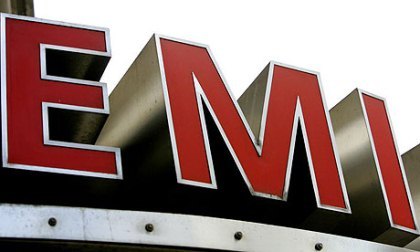 EMI Group Ltd., home of The Beatles, Coldplay and Katy Perry, is being sold in two parts for $4.1 billion.

Universal Music Group said Friday that it has agreed to buy the recording division of EMI for 1.2 billion pounds ($1.9 billion).

Sony/ATV has reached a deal to buy the second part, the publishing division in charge of songwriting copyrights, for $2.2 billion, according to a person familiar with the matter.

The deal leaves Citigroup, EMI's owner, with liability for a pension plan worth about $600 million, a second person said.

Both people were not authorized to speak publicly and spoke on condition of anonymity.

Citigroup had put the iconic British music company up for sale after foreclosing on private equity firm Terra Firma in February. Terra Firma bought EMI in 2007 in a 4.2 billion-pound ($6.8 billion) acquisition financed with debt from Citigroup, but it couldn't make enough money to keep up with the terms of its debt.

The deal is likely to face intense regulatory scrutiny because Universal Music, a unit of Vivendi SA, is already the world's largest music company with about 27 percent of the recorded music market. Adding EMI's approximately 9 percent will give it a clear edge over Sony Corp.'s Sony Music Entertainment, the second largest.

Impala, an association of European independent music companies, said this week that it would oppose such a "duopoly" taking over EMI.

In a move that may appease regulators in Europe and the U.S., Vivendi said it would sell €500 million ($680 million) worth of non-core assets. Strategic bidders that lost out on the auction, such as Warner Music Group, are expected to be in line to bid on the parts that get spun off.

Vivendi said that London-based EMI would find a safe home at a company headquartered not far away in Paris.

"For me, as an Englishman, EMI was the pre-eminent music company that I grew up with," said Universal CEO Lucian Grainge, in a statement. "UMG is committed to both preserving EMI's cultural heritage and artistic diversity and also investing in its artists and people to grow the company's assets for the future."

Universal also released statements from bands in support, including from Coldplay manager Dave Holmes, who said "this can only be a positive for the artists and executives at EMI."