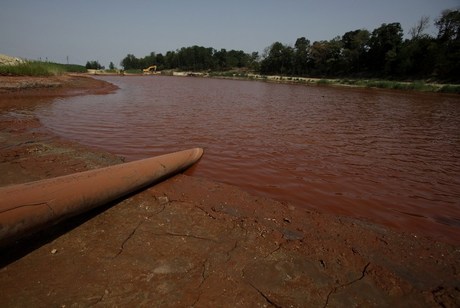 Victims of Hungary's worst ever toxic spill, which killed 10 people and injured 150 in 2010, voiced outrage after the boss of the alumina plant that caused the disaster was cleared of any wrongdoing on Thursday.

Zoltan Bakonyi, the former director of the MAL alumina plant in Ajka, and 14 employees were acquitted of charges of negligence, waste management violations and damages to the environment.

Prosecutors had demanded prison sentences for all those on trial over the disaster, which had sent toxic sludge cascading into villages in western Hungary after the plant's holding reservoir burst its walls on October 4, 2010.

But the court said the employees -- which also included several senior managers -- could not be held criminally responsible because the disaster had ostensibly been caused by a "loss of stability in the undersoil."

The judgment sparked strong reactions in the packed courtroom in the city of Veszprem, with one man shouting "Outrageous verdict! We will protest!" before being escorted out by a security guard.

The man had also unfolded a banner showing pictures of destroyed homes, with the words: "This is all 10 people's lives are worth?"

A 54-year-old metalworker who lost his parents in the disaster, shook his head at the ruling, saying he would "never get over what happened."

"The body of my father was only found a week after the accident, covered in mud on a football pitch, some five kilometers from his home," Gyula Tokolics told AFP.

"I discovered my mother's body in the house. She had just served lunch."

The mud -- a caustic byproduct of aluminum extraction -- rushed into the nearby villages of Kolontar, Devecser and Somlovasarhely.

The sludge also wiped out almost all life in nearby rivers and even spread to the Danube.

In total, the devastation spread across an area of 40 square kilometers (over 15 square miles).

Responding to the disaster, the Hungarian government declared a state of emergency and evacuated around 8,000 people from the area.

Over the following months, workers worked tirelessly to remove the mud from the flood plain and doused the area with acid.

Authorities also slapped a 135-billion forint (430 million-euro, $470-million) fine on MAL in 2011 and moved to nationalize the plant.

Last February, Budapest set up a compensation fund for the victims, with many claims still outstanding.

But despite vast sums spent on depolluting the region, it still bears traces of the tragedy.

Hundreds of hectares of land remain sealed off and cannot be used for cultivation.

Having lost their homes and loved ones, dozens of local residents moved elsewhere in the aftermath of the accident.

In Devecser, church bells ring every year on the anniversary of the spill.

The accident was bound to leave "an indelible mark", the village's then-mayor, Tamas Toldi, had told AFP in 2011.

"We are not necessarily saying that all 15 were guilty but we very disappointed that more than five years after the disaster there is still no one held responsible," spokesman Gergely Simon told AFP.

"If you look at the scientific and technical evidence, we believe it is clear that the disaster was not a natural disaster but was due to human error," he said.

"Satellite images show that the walls of the dam were moving, and nobody checked the stability of the dam however between 2000 and 2010."