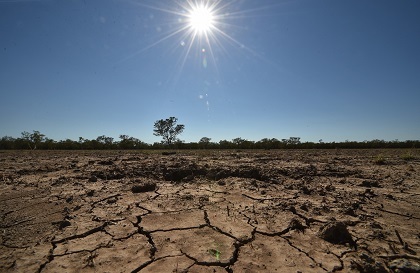 At least 10.2 million people need food aid in Ethiopia, a figure the U.N. has warned could rise sharply, as "forecasts indicate that it could double within months" casting a fifth of the population into hunger.

Floods and failed rains caused by the El Nino weather phenomenon have sparked a dramatic rise in the number of people going hungry in large parts of Africa, with Ethiopia of special concern.

"People of the country are facing the worst drought in 30 years. ...the scale of emergency is too much for any single government," Ban told reporters in the Ethiopian capital.

"Immediate support will save lives and also support the impressive development that Ethiopia has made during the last decade."

Ethiopian Deputy Prime Minister Demeke Mekonnen warned his country had less than half of the $1.4 billion (1.3 billion euros) needed.

"Last year Ethiopia was hit by one of the strongest El Nino events on record... the scale and severity of humanitarian needs have significantly increased," he said.

Food insecurity is a sensitive issue in Ethiopia, Africa's second most populous nation which enjoys near-double-digit economic growth, but which has struggled to change its image following famine in 1984-85 after extreme drought.

Thousands have left hardest hit regions, with stream of refugees still travelling across the Gulf of Aden to Yemen despite the conflict raging there. Nearly 100,000 Ethiopians and Somalis last year traveled by boat to Yemen, according to U.N. figures.

El Nino is triggered by a warming in sea surface temperatures in the Pacific Ocean. It can cause unusually heavy rains in some parts of the world and drought elsewhere.

In southern Africa, around 14 million people across southern Africa face going hungry after a prolonged drought wrecked harvests, with Malawi among the worst hit countries.

Little rainfall in 2015 has left 2.8 million people in Malawi facing hunger, 1.9 million in Madagascar and 1.5 million in Zimbabwe, where last year's harvest was half that of the previous year.

In war-torn South Sudan, bordering Ethiopia, U.N.-backed experts warned late last year of a "concrete risk of famine" with tens of thousands of people feared to be starving to death outside areas aid workers can reach.

Some aid has been delivered, but civilians report dire conditions.

The conflict has triggered a humanitarian crisis with 2.3 million people forced from their homes and 5 million -- around half the population -- in need of emergency food aid.