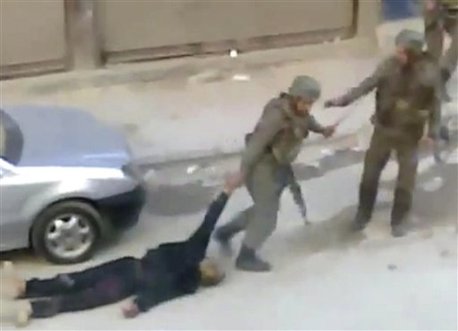 A week of deadly violence in the central Syrian city of Homs piled pressure on Arab foreign ministers gathering for an emergency meeting in Cairo Saturday to take action against Damascus for failing to honor an Arab League peace deal.

President Bashar Assad's regime agreed on November 2 to an Arab roadmap which called for the release of detainees, the withdrawal of the army from urban areas and free movement for observers and the media, as well as negotiations with the opposition.

Instead, human rights groups say, the regime has intensified its crackdown on dissent, especially in flashpoint Homs, killing at least 125 people in the city since signing onto the League's deal.

"Homs is a microcosm of the Syrian government’s brutality," said Sarah Leah Whitson, Middle East director of Human Rights Watch, which accused the regime of crimes against humanity based on its systematic abuses against civilians.

"The Arab League needs to tell President Assad that violating their agreement has consequences, and that it now supports Security Council action to end the carnage," she said.

Human Rights Watch, like protesters and Syrian opposition leaders, urged the Arab League to suspend Syria's membership of the pan-Arab bloc as punishment for its brutal eight-month crackdown on dissent.

At least 23 people were killed in violence in Syria on Friday alone, most of them civilians in Homs, which an opposition group declared a "humanitarian disaster area" earlier this week.

With NATO ruling out operations and U.N. Security Council sanctions unlikely because veto-wielding permanent members Russia and China are allies of Assad's regime, regional actors have come to represent the best avenue to pressure Damascus.

Damascus says it has moved forward on the deal by releasing 500 prisoners and Syrian envoy to the Arab League, Youssef Ahmed, expressed on Friday his government's willingness to receive a pan-Arab delegation.

"This will help assess Damascus's commitment to the (Arab) plan and to unveil motives behind certain external and internal parties working for the failure of the Arab blueprint," the official SANA news agency quoted the envoy as saying.

Despite the Assad regime's prevarication, the United States insists its days are numbered and says that even Arab leaders are encouraging him to step down quickly.

"Some Arab leaders already have begun to offer Assad safe haven in an effort to encourage him to leave peaceably and quickly," said Assistant Secretary of State for Near Eastern Affairs Jeffrey Feltman.

"Almost all the Arab leaders say the same thing -- Assad's rule is coming to an end. Change in Syria is now inevitable," Feltman told members of the Senate Foreign Relations Committee in a hearing.

" ....All is under control in Syria..." ask Aoun and do not believe the news concocted by conspirators.
One could question why the Syrian regime is not among the seven world wonders!?

All the Arabs are now considered Zionist, you will hear this on the Manar TV now that all the arabs including the new Libyan leadership are Mossad.
As usual you are either with us or you are Mossad and American Zionist, therefore the road to Palestine must pass thru Bashar or Dahyeh first.

That's right, the crises is over...Aoun said so. So did Bashar, and Arslan and Frangieh and Nasrallah. These images on TV and reports in the news are baseless propoganda from the west. Don't you see? Syria is fighting terrorists and armed thugs...unbelievable. It's the same lies that Qadaffii and Saddam use to throw out there when they were about to be toppled. For the sake of the Syrian people and the Lebanese, let's pray for the downfall of the Syrian dictatorship.