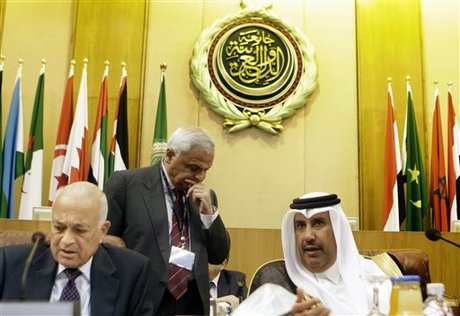 The Arab League suspended Syria on Saturday until President Bashar Assad implements an Arab deal to end violence against protesters, and called for sanctions and transition talks with the opposition.

Syrian envoy Youssef Ahmed angrily denounced the move as illegal, saying Damascus had already implemented the deal and claiming the United States had ordered the suspension.

Ahmed charged that the League with trying to "provoke foreign intervention in Syria, as was the case in Libya."

The suspension will last "until the total implementation (by Syria) of the Arab plan for resolving the crisis accepted by Damascus on November 2."

But Ahmed told a Cairo press conference that Damascus had "implemented all the articles of the agreement," even though at least 125 people have reportedly been killed in the flashpoint city of Homs alone since the deal was inked.

"It was clear (the decision) was decided through a U.S. order," he said, accusing the League of working for an "American agenda."

Ahmed also said the moves decided by the organization’s foreign ministers by a majority vote "put an end to joint Arab action and show that the (League's) administration is subjected to U.S. and Western agendas."

Apart from the suspension, which had been sought by the Syrian opposition, the League called for the withdrawal of Arab ambassadors from Damascus but left the decision to each member state.

Sheikh Hamad said the measures would take effect on Wednesday, and that Arab ministers would meet again to decide on specific sanctions.

The statement also called for the protection of civilians and said League chief Nabil al-Arabi would contact international organizations, including the United Nations, if the bloodshed continued.

It called for a meeting in Cairo with Syrian opposition groups in three days to "agree a unified vision for the coming transitional period in Syria." The opposition would later meet with Arab foreign ministers.

A week of deadly violence in city of Homs overshadowed the meeting, in which ministers had appeared divided on what measure to take but eventually voted on the final statement with 18 in favor, three against and one abstention.

Under the November 2 deal, Assad's regime agreed to release detainees, withdraw the army from urban areas, allow free movement for observers and media and negotiated with the opposition.

Instead, human rights groups say, the regime has intensified its crackdown, especially in Homs.

"Homs is a microcosm of the Syrian government’s brutality," said Sarah Leah Whitson, Middle East director of Human Rights Watch, which accused the regime of crimes against humanity based on its systematic abuses against civilians.

With NATO ruling out operations and U.N. Security Council sanctions unlikely because veto-wielding permanent members Russia and China are allies of Assad's regime, regional actors have come to represent the best avenue for pressure.

Damascus argues it has moved forward on the deal by releasing 500 prisoners, and Ahmed had on Friday expressed his government's willingness to receive a pan-Arab delegation.

The United States, which has called on Assad to step down, insists his regime's days are numbered and that even Arab leaders are encouraging him to go.

"Some Arab leaders already have begun to offer Assad safe haven in an effort to encourage him to leave peaceably and quickly," said Assistant Secretary of State for Near Eastern Affairs Jeffrey Feltman.

Bravo Arab League!!!!!!!! ASSad's time in power is coming to an end. You went the right direction just as I predicted. this is the beginning of the end.

I'd rather see all arabs back on their camels than see Lebanon turning into a Islamic Iranian style oumma...

mfawaz, funny for you but very happy........... this is the downfall of syrian regime and nasrallah inshallah

yria is done and it has been served the last bullet.
from now on it is only the beginning of the end.

If Bashar has any intelligence, he would walk away now! But then again, I doubt he will....

I said the same thing about Ghaddafi in the beginning of .....

If Bashar has any intelligence, he would walk away now! But then again, I doubt he will....

I said the same thing about Ghaddafi in the beginning of .....

This is all very noble, but will not lead to anything. If there were an international military cooalition formed and ready to implement a military plan to oust Assad once the regional organization took this action, then this action would trigger the fall of the Assad Regime.

Instead, NATO has already said, under no condition would it engage in military operations against the Assad Regime. Without that, Assad can hold out for as long as his money and weapons will allow, regardless of these actions by the Arab League. They will talk to the opposition, and maybe remove their ambassadors, but none of this removes the Assad Regime.
It will go the way of Gadaffi, or not at all. Unless some international state steps up to do the deed, Assad will continue to thumb his nose at the world and to ruthlessly commit atrocity after atrocity against the people of Syria.

Shame on the world for allowing this to happen. There are far reaching consequences that will come from non-action.

Bashar's real enemy is Bashar.. he has very low IQ, that is the real problem, you can figure it out as soon as he opens his mouth and talks.. very boring person..

What can I say? This is spectacular news. I knew they would roll the killer of Damascus. Now we just need to wait three days for the final chapter to unfold. Look for my fire works on the top of the highest point in all of Lebanon when the end has occurred.

This is really great, i am jumping!!! Wooooo Hoooooooo!!!!

@Bigdig, Bahrain is being ignited by shiites coming from Iran to attack the Saudi Embassy and plant car bombs, read today's news ya walad before opening your mouth and compare apple to oranges. Same fashion of the cell that was trying to assassinate the Saudi ambassador in the US. Yeah I know it's all the Mossad fault and it's a deja vu answer..
Bottom line resolving conflict by mass killing and assassinations of political figures (i.e. Syrian terrorist regime and your allies militia) will result in nothing but an equal and opposite reaction.

Where are all the pro-Assad guys now? Where are they to tell me I was wrong? This was a glorious day!!!!

can any clever people tell me what the brave syrians have done to
recoup the Golan.

The Arab league took a wise decision. It didn't haste not did it with vindictiveness. I hope the regime in Syria wisen up and heed the demands of its people. If this happens, lebanon would be a much better off country close to a democratic Syria. The two countries would then be a potent economic powerhouse.

With the regime in Syria, Lebanon has inched closer to becoming a totalitarian state.

@bigdig: could you just tell us what good is the syrian regime of the assad to lebanon?
could you tell us why you support such a murderous regime?
you forgot about all the killings this regime did in lebanon?
or the assassinated lebanese means nothing to you...

so just tell us the reason behind your support of a regime that has harmed lebanon MORE than israel ever did....

show me 1 arab country from the arab league that have real democracy ??!!1
and they give lessons
the west called the uprising arab spring on purpose all arab countries will have a taste of it after syria the gulf states
and then the league becomes democratic arab league