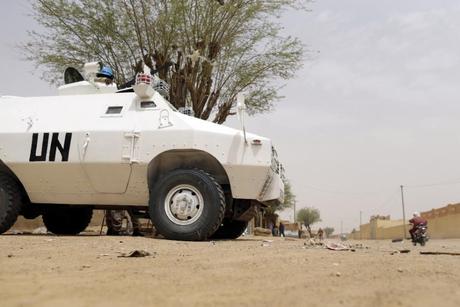 Shots were still being heard in the area, a source in the U.N. peacekeeping force in Mali (MINUSMA) told AFP, indicating hours-long fighting.

"Six to seven terrorists arrived very early in the morning at a MINUSMA camp in Timbuktu. They blew up their vehicle before attacking the camp with mortars," the source said.

A Nigerian peacekeeper was wounded, the source said, adding that the camp had recently been evacuated by blue helmets from Nigeria but some soldiers had remained there.

A Malian military source said Malian troops were "fighting to neutralize the terrorists."

A Malian soldier was killed last month in an ambush on the outskirts of Timbuktu in continuing violence in the sprawling arid north of the country.

Northern Mali fell under the control of Tuareg rebels and jihadist groups linked to Al-Qaida in 2012.

The Islamists sidelined the Tuareg to take sole control but were largely ousted by a French-led military operation in January 2013.

But Al-Qaida-linked insurgents wrecked 14 of Timbuktu's iconic earthen shrines built during its 15th and 16th century golden age as an economic, intellectual and spiritual center.

They considered the shrines, as well as priceless ancient manuscripts, to be idolatrous.

Large swathes of Mali remain lawless however despite a June peace deal between the former Tuareg rebels and rival pro-government armed groups.