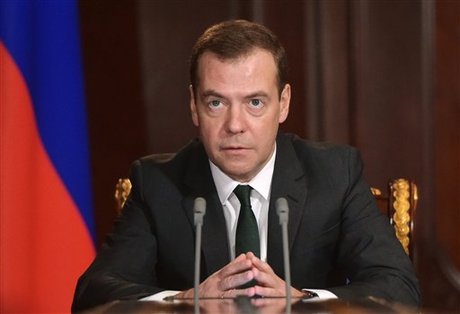 The world has plunged into a "new Cold War", the Russian premier said Saturday, as East-West tensions over Ukraine and Syria took center-stage at a gathering of world leaders in Germany.

"We have slid into a new period of Cold War," Prime Minister Dmitry Medvedev told the audience at the Munich Security Conference.

"Almost every day we are accused of making new horrible threats either against NATO as a whole, against Europe or against the U.S. or other countries," Medvedev added.

It did not take long for those accusations to resurface in Munich, as a group of leaders from eastern Europe took the stage to criticize Russia's assertive foreign policy.

Poroshenko warned that "pro-Russian parties" were undermining Europe from within with an alternative set of values.

"Isolationism, intolerance, disrespect of human rights, religious fanatics, homophobia -- this alternative Europe has a leader. His name is Mr. Putin."

By contrast, Medvedev had earlier criticized the expansion of NATO and EU influence deep into formerly Soviet-ruled eastern Europe, which Russia still sees as its sphere of influence.

"European politicians thought that creating a so-called belt of friends at Europe's side, on the outskirts of the EU, could be a guarantee of security, and what's the result?" he said. "Not a belt of friends but a belt of exclusion."

But Medvedev also struck a more positive note, saying: "Our positions differ, but they do not differ as much as 40 years ago when a wall was standing in Europe."

He urged more dialogue, citing the "shining example" of the historic meeting of Pope Francis and Russian Patriarch Kirill in Cuba on Friday.

He also called for greater military cooperation in Syria, where Russia is backing a regime that the West wants to see removed from power.

The U.S. and Russian militaries "should be in contact 10 times a day," he said.

"We have seen a more assertive Russia, a Russia which is destabilizing the European security order," he said. "NATO does not seek confrontation and we don't want a new Cold War. At the same time our response has to be firm."

NATO was now "undertaking the biggest reinforcement to our collective defense in decades, to send a powerful signal to deter any aggression or intimidation. Not to wage war, but to prevent war."

Earlier this week, Stoltenberg announced that plans had been approved for an increased NATO presence in eastern Europe -- which sources said would involve between 3,000 and 6,000 troops rotating through the region.

"Russia's rhetoric, posture and exercises of its nuclear forces are aimed at intimidating its neighbors, undermining trust and stability in Europe," Stoltenberg said in Munich.

The NATO chief said that "some are concerned that we are sleepwalking toward escalation with Russia... I understand those concerns but I do not share them."

He urged a "more constructive and more cooperative relationship with Russia... I strongly believe that the answer lies with both more defense and more dialogue."