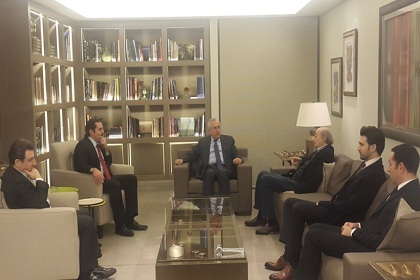 The meeting was also attended by the ministers who represent Suleiman in the cabinet – Samir Moqbel, Alice Shabtini and Abdul Mutalleb Hennawi – in addition to Minister Wael Abou Faour of the PSP and Hariri's adviser Nader Hariri.

“Lebanon is going through a very difficult period in the absence of a president and, in my opinion, this is the real problem in the country,” said Hariri upon his arrival.

Turning to the issue of the row with Saudi Arabia over Lebanon's recent diplomatic stances and Hizbullah's verbal attacks, Hariri described the Lebanese foreign ministry's decision to refrain from voting on an Arab League statement condemning Iran as a “sin against Lebanon and the Lebanese.”

“The foreign minister (Jebran Bassil) must stop saying that he coordinated his stance with the prime minister,” Hariri added.

Jumblat meanwhile described a statement issued Monday by the Lebanese government on the ties with Saudi Arabia and the Arab countries as “beneficial,” noting that it was issued after a “compromise” by the parties that are represented in the cabinet.

“We do not want to be in a certain axis against another and we want to stress the importance of the policy of real dissociation (from regional conflicts) that was carved out by president Michel Suleiman,” Jumblat added.