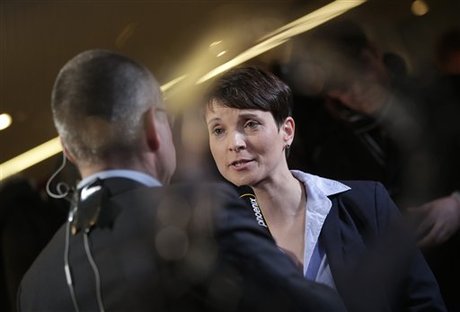 The success of the anti-migrant AfD marks a turning point for Germany's usually stable and consensus-driven politics -- the rise of right-wing populists at the expense of old mainstream parties.

The far-right Alternative for Germany (AfD) made strong gains in three state polls Sunday in what was widely seen a protest vote against Chancellor Angela Merkel's open-door policy on refugees.

The AfD, whose rhetoric often echoes that of France's Marine Le Pen and US White House hopeful Donald Trump, is now set to enter assemblies in half of German states and, if it maintains its momentum, would be elected to national parliament next year.

In the formerly communist eastern state of Saxony-Anhalt the only three-year-old AfD scored a stunning 24 percent, forcing three other parties to scramble to form a coalition government.

The AfD's rise "shows that Germany has caught up with all other European countries: it has finally lost its immunity against populist parties," wrote analyst Carsten Brzeski of ING-DiBa bank, calling the trend modern Germany's "loss of innocence".

"Hatred of foreigners, fear of being overrun and a deep mistrust of politicians and the so-called mainstream media has spread -- a dangerous mix that is now finding expression in the AfD."

It judged that Sunday's elections showed that "a section of society has withdrawn itself from the classical model of representative democracy with its rules of compromise and consensus".

The AfD was launched in 2013 as an anti-euro party but has since shifted its focus to migrants, campaigning against mosques and urging voters to have more children to avoid the need for immigration.

Some of its leaders have voiced sympathy for the Islamophobic PEGIDA movement, whose "Wutbuerger", literally "enraged citizens", share its deep distrust of the established parties and media, which they label a disconnected elite or power cartel.

Germany's post-war politics have been dominated by Merkel's conservative CDU and its Bavarian allies on the right, and the old "workers party" the Social Democrats (SPD) on the left.

Usually one of them has governed with a smaller party but, as support for both has slipped, they now share power in a "grand coalition".

"The consensus model is no longer working, the binding power of the major parties has long been dwindling," said Die Zeit.

While the SPD has lost support to the Greens and far-left Linke, the CDU has captured much of the middle ground while so far fending off parties on the far-right fringes in a country where memories of Nazi dictatorship run deep.

However, "decade by decade, the German taboo of not voting for the extreme right ever again loses a bit of its force," said Holger Schmieding, chief economist at Berenberg Bank.

"That gives the AfD today an advantage over previous right-wing parties."

Schmieding however stressed that, despite its spectacular regional gains, the AfD remains "a single-issue protest party without a serious pro‎gram and a convincing leadership" which remains "light years away from any position of influence".

"If the refugee issue recedes from the headlines and if the sheer incompetence of many AfD parliamentarians becomes ever more apparent, support for the AfD may fade fast again in a while," he wrote.

In this case, "relative to, say, Marine Le Pen in France and Donald Trump in the U.S., support for anti-immigration populists in Germany would still remain fairly muted even in these potential protest votes".

Most political analysts agree that in Germany, as in other Western democracies, traditional party loyalties have faded and labels such as left and right have grown hazy. While voter turnout has broadly declined, those who do cast their ballots often do so on single issues or to express their anger.

In Germany, "the public mood is very radicalized at the moment," said Andreas Roedder, modern history professor at Johannes Gutenberg University in Mainz.

"It is polarized between morally arrogant and self-assured 'multi-culturalists' who still favor the 'welcoming culture' and ignore all the difficulties associated with it, and on the other hand misanthropic, xenophobic tendencies that offer only simple, patent remedies," said Roedder.

"What I worry about is Germany's democratic center that accepts that there are no simple solutions to these questions, that there is no clear right or wrong."