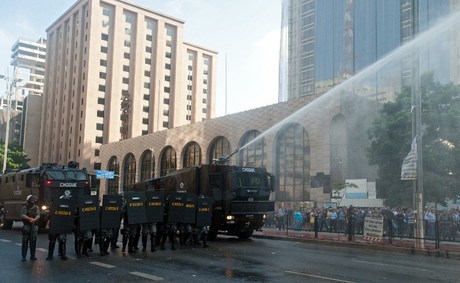 Riot police in Brazil broke up an angry anti-government protest Friday as President Dilma Rousseff's supporters mobilized for a rival show of force against impeachment proceedings launched by her enemies in Congress.

With the leftist leader fighting calls to quit and financial markets apparently betting on a collapse of her government, Rousseff's embattled left-wing base has vowed to take to the streets.

Hours before nationwide demos seeking to prove the president's strength, riot police in Sao Paulo -- Brazil's largest city and an opposition bastion -- fired stun grenades and water cannon to disperse some 150 hard-core anti-government protesters who had been camped out for nearly two days in the heart of the financial capital.

Police in the capital Brasilia had fired tear gas and stun grenades Thursday night to fight back furious protesters demanding the president's resignation.

The ongoing protests come against the backdrop of new impeachment proceedings against Rousseff, 68.

An impeachment committee in the lower house of Congress held its first session Friday, saying it expected to reach a decision within a month on whether to recommend removing the president.

Its recommendation will then pass to the full chamber, where a vote by two-thirds of the 513 lawmakers would open an impeachment trial in the Senate.

Rousseff is accused of manipulating the government's accounts to boost public spending during her 2014 re-election campaign, and again in 2015 to mask a deep recession.

She accuses her enemies of mounting a "coup" against her.

The courts have meanwhile blocked Rousseff's bid to bring her powerful predecessor Luiz Inacio Lula da Silva into the cabinet.

Raising fears of clashes between rival demonstrators later in the day, the anti-government protesters in Sao Paulo vowed they would return.

"According to the art of war, you take a step back now and two steps forward later. We're going to come back," protest leader Renato Tamaio told news portal G1.

The latest protests follow a day of pandemonium in Brasilia, where Rousseff swore in Lula, 70, as her new chief of staff -- only to have the courts block the appointment.

A federal court intervened after a crusading anti-corruption judge leaked a wiretapped phone call suggesting the president was trying to shield her mentor from prosecution through ministerial immunity.

The Sao Paulo stock exchange soared 6.6 percent Thursday on optimism in the financial world that the end was near for Rousseff. Stocks were down one percent on Friday, however.

Lula and Rousseff between them have governed Brazil since 2003. He presided over a boom, but political and economic crises are now gripping Latin America's biggest economy.

Lula, who stepped down in 2011, is charged with accepting a luxury apartment and a country home as bribes from construction companies implicated in a multi-billion-dollar corruption scam at state oil company Petrobras.

Anti-government protests have swept the country since Sunday, when between one and three million people, according to different estimates, took to the streets nationwide.

Protests erupted again on Wednesday after the release of the wire-tapped phone call between Rousseff and Lula, in which she told him she was sending him a document with his official ministerial appointment, to be used only "if necessary."

That fueled outraged cries that the president was bringing Lula into her government to save him from arrest in the Petrobras case.

Friday's pro-government protests are an attempt by the ruling Workers' Party to show it still retains the support that made it the dominant force in Brazilian politics over the past 13 years.

Organizers said in a statement the demonstrations aimed to fend off a "coup" and to defend Rousseff's social policies. Leaders vowed the rallies would be peaceful.

Brazil grabbed world headlines in 2013 when it was gripped by mass riots against corruption and increased transport costs.

Recent polls show Rousseff's popularity rating is down to about 10 percent and 60 percent of Brazilians would support her impeachment.

"We do not have healthcare, education and security, and we see these politicians robbing us."