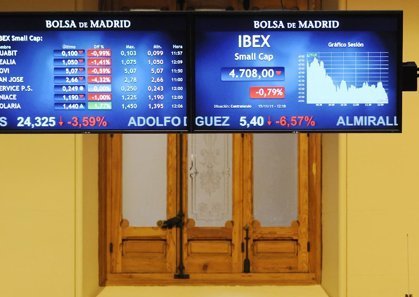 Investor sentiment was already under pressure after ratings agency Fitch warned overnight that US banks could be exposed if the Eurozone crisis intensified.

The critically important spread between German and French borrowing rates indicated on the market for existing bonds rose above 2.0 percentage points.

Meanwhile German Chancellor Angela Merkel urged Italy's new Prime Minister Mario Monti in a letter: "You enter office at a difficult time for your country as well as for the Eurozone as a whole, in which great hopes and expectations are directed at you."

She said: "You and your government are called upon to quickly decide and implement crucial and necessary reform measures."

At Russian financial group VTB Capital in London, economist Neil MacKinnon said: "The Eurozone crisis shows little sign of respite and there is a real risk of an escalation in the crisis."

The government had hoped to raise between three and four billion Euros with the bond sale and the interest rate paid is the highest since the creation of the euro single currency, according to Dow Jones Newswires.

"Spain's debt auction will do nothing to settle nerves in Madrid," said research director Kathleen Brooks at trading site Forex.com.

"The yield investors demanded to hold 2022 debt was 6.97 percent -- millimeters away from the crucial 7.0-percent level considered to be the threshold that could push Spain to needing a bailout.

"Spain still has 12 billion Euros of debt to auction next month, if sentiment does not start to pick up then we could see funding stresses reach a critical level in Madrid very quickly," Brooks added.

The AFT state debt management agency announced the sale shortly after the spread between German and French traded bonds showed the widest gap since the launch of the euro.

Despite new governments taking over in Italy and Greece to push through key reforms, the cost of borrowing for under-pressure countries remained dangerously high.

Italian benchmark 10-year bond yields once again topped 7.0 percent on Thursday, while in Spain -- whose massive debt and crippling unemployment has also come into focus -- the cost of borrowing has hit 6.66 percent.

Bond yields remained above or close to the 7.0-percent danger zone considered unsustainable for governments to service their debts.

"The basic question is what is going to be done about Italian and Spanish bonds," said Edward Hugh, independent economist based in Catalonia, Spain.

"Is the ECB going to continue buying or is another formula going to be brought forward?," he asked.

"There seems to be a complete silence at the moment."

Asian stock markets closed mixed on Thursday but trading was cautious after two ratings agencies sounded alarm bells over the potential impact of the Eurozone debt crisis on major banks.

Fitch warned that the contagion effects on U.S. banks were "potentially large" if the crisis spreads beyond Greece, Ireland, Italy, Portugal, and Spain.

Fitch said the top five US banks had $188 billion in exposure to France at the end of the second quarter, $114 billion of it to French banks.

Wall Street's three main indexes ended lower on Wednesday following the announcement, with the Dow Jones Industrial Average off 1.58 percent, the S&P 500 down 1.66 percent and the Nasdaq losing 1.73 percent.

Adding to the sense of fear was Moody's decision to downgrade 10 German public-sector banks.

There was a little respite in Europe after Italy's new Prime Minister Mario Monti put together his new cabinet charged with pushing through legislation aimed at putting the economy back on an even keel.

And in Greece, talks with international banks on reducing the country's mountain of debt appeared snagged on details of how the banks will take their losses.