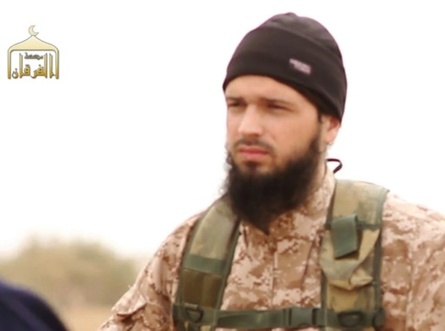 The parents of a Syrian soldier allegedly decapitated by a French jihadist have taken their quest for justice to a Paris court where they gave evidence against their son's suspected killer, their lawyer said Tuesday.

The soldier, identified as Ghaisse M., was among a group of prisoners, including American aid worker Peter Kassig, decapitated by Islamic State jihadists in November 2014.

One of the killers was identified from a grisly IS video of the execution as Maxime Hauchard, a 24-year-old Frenchman from Normandy, and an international warrant was issued for his arrest.

French authorities have opened a judicial inquiry into "murders linked to a terrorist act" over the executions.

"The Syrian justice system cannot function in the current context. It is up to France to judge its citizens when they commit atrocious crimes in our country," said Ghassan M., the father of the soldier, who has filed a civil lawsuit against Hauchard in France.

On Friday, he and his wife gave evidence to a judge.

"It is the first time that a Syrian family is a plaintiff in a case implicating a French jihadist who has gone to Syria," lawyer Fabrice Delinde said.

He said the soldier's parents "were able to talk about the particularly atrocious circumstances surrounding the death of their child."

Ghassan said his 30-year-old son was kidnapped in 2013 by the Free Syrian Army, a loose coalition of opponents to Bashar Assad's regime.

After six months he was handed over to the al-Qaida-linked al-Nusra Front.

"We paid a ransom to the al-Nusra Front. But they tortured him and sold him to Daesh (IS) who decapitated him," he said.

Attempts by Ghaisse's parents to bring the case to court in France were initially rejected, but the Paris appeals court later ruled it was admissible.