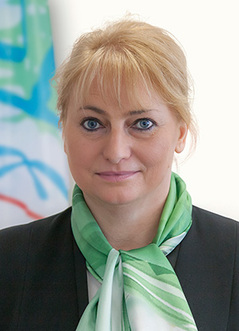 Special Tribunal for Lebanon President Judge Ivana Hrdličková told Naharnet in an interview carried out in Beirut that the contempt cases against Al Jadeed TV and Al Akhbar newspaper do not aim to target the media or journalists in Lebanon, saying anyone involved in contempt should be held responsible. She also stressed the impartiality and independence of the Court’s work, saying the STL is not influenced by political interference.

Here is the full text of the interview:

1-How do you assess the impact of the trial of Al Jadeed TV and Karma Al Khayat on the credibility of the STL and its image in public opinion? Don’t you think that you appeared confused in dealing with this matter through the conflicting verdicts?

Thank you very much for your questions. First of all I believe that crimes of obstruction of administration of justice are known in almost all domestic legislations and of course all international criminal tribunals. It is an important inherent power of the Court to protect the main proceedings, the trial, victims, witnesses, judges and other actors of the Court.So it’s fundamental for the Court to have such a right.

Concerning your question about the different judgments. I know that Lebanon is the same as other jurisdictions. You have the first level of court, then appeals and court of cassation. Judges are working impartially and independently. So it happens in all jurisdictions that the decisions can be completely or partially reversed.

I believe that the different decisions of the panel should not confuse the public but to bring more understanding of the cases and also show the independence of the court.

2-So you don’t think you have a problem of credibility with the public opinion?

Public trust with the courts is essential. I would like for the Lebanese society to understand the work of the Tribunal. The media has an extremely important role in this process and can make the process more understandable.

3-The press in Lebanon is facing financial crises that are threatening its existence. Don’t you think that the STL’s prosecution of some media outlets would portray you as contributors to harming the press in Lebanon?

I am aware of the crisis of written media in all the world. I think it’s the price of our digital world which has a lot of advantages and obviously disadvantages as well. The contempt cases before the Tribunal are not cases against journalists at all. The purpose is to protect the proceedings, witnesses and victims in the main trial. All who commit crimes of contempt should be held responsible.

There are several forms of how contempt can be committed: To publish confidential information or in the court if someone undermines public figures, or it happened in the international criminal tribunal when witnesses were bribed and gave false testimony.

If the Court does not have the power to affect the trial, then that would affect the fairness of the trial which is essential for the judicial work.

4-Hizbullah is being targeted by a political and media campaign in Lebanon and has come under financial, Arab and international sanctions as a result of its military role in Syria and several Arab states. Would such a situation push the Court to speed up or slow down its functions so it won’t be seen as a complicit in the measures taken against Hizbullah, in particular that the suspects on trial are Hizbullah members.

5-So, you don’t take into consideration the parallelism of the judiciary and the political process in Lebanon?

I believe that one of the fundamental roles of the judiciary is to be separated from politics. That’s how we work.

6-Do you have the intention or the jurisdiction to ask the international community - which is tightening the noose on Hizbullah over its military role outside Lebanon- to put more pressure on Hizbullah so that the five suspects are handed over to the Court?

The STL as the other international criminal courts does not have any judicial police. We rely on Lebanese authorities to bringing the accused to the court. They update us on a regular basis on the efforts they are making. International arrest warrants are issued on the five accused and Interpol is informed about this. One of the novelty in international criminal law is the contribution of the Lebanese judiciary allowing the trials in absentia. It is the first time after the Nuremberg for an international criminal court to be enabled to trial in absentia. The best way is to have the accused in the courtroom but if it is not possible, then at least when all the criteria are met and the judges are satisfied, then the trial could start.

7-Several weeks ago, Saudi Arabia halted $4 billion of aid to the Lebanese army and security forces. Do you think the measures taken by the Gulf states against Lebanon would include a halt to the funding of the STL? Would such a measure put an end to the Court’s functioning or obstruct its work?

8-Did you receive any sign from Saudi Arabia or other Gulf countries that they will stop funding the STL?

I don’t know. Maybe you have more information than me in that regard.

9-Have you noticed that the solidarity expressed by some political and public circles in Lebanon with Al Jadeed TV and Al Akhbar newspaper was wider than the solidarity with the STL? What were your conclusions on that? Does the final verdict that contradicted the first one reflect a decision by the Court to rectify its relations with the Lebanese media?

10- Haven’t you noticed from the reaction of the media and some politicians in Lebanon that the Court needs a team of “friends” who would defend its image and its role at the media and popular level similar to the mandate of the “friend of the court” who plays the role of the prosecutor in contempt cases?

The only friends of the Court we have are all people who follow our proceedings objectively. I am deeply attached to the fairness of the proceedings.

11- It is not new for some public opinion in Lebanon to accuse the STL of having a slow pace. Is there anything new to expect from the Court in the investigations into the attacks carried out after former Prime Minister Rafik Hariri’s killing which the STL has established jurisdiction over?

The Tribunal has jurisdiction over the attack from Feb. 14. 2005 and cases that may be connected. The criteria for the connection are said in Article 1 of the Statute of the Tribunal. The main case of the Hariri assassination is at the moment before the Trial Chamber and the Prosecutor is presenting his part of the evidence and is expected to finish his case at the end of this year. Afterwards, the victims have time to present their views. So it is difficult now to say when the trial can be finished but we are working hard to complete the trial stage around Feb. 2018.

12-Aren’t you disturbed by the image, which shows the parties opposing the STL in solidarity among each other, at a time when the political camp that had called for the STL’s establishment is standing idle and at times is seeking to reach a political settlement with its rivals, mainly Hizbullah? Doesn’t that frustrate you and psychologically affect your work one way or another?

I wish that the Lebanese society understands the work of the Tribunal which is independent, judicial work not influenced by any political ideas.

13-There has been a report that the Court will add Hizbullah chief Sayyed Hassan Nasrallah and top Syrian officials to the list of the accused. What is your comment on that?

We hear a lot of speculations since the Tribunal was established. We don’t comment on speculations. I would suggest to follow the activities and decisions of Tribunal that are being posted on its website and get in touch with the STL spokesperson.

Thank you very much for your interest.

Hrdličková concluded her trip to Lebanon on Thursday, after holding a number of meetings with Lebanese government officials, diplomats, as well as representatives of the legal and academic communities in Beirut.

The STL President also participated in a number of outreach events, said a press release issued by the Court.

She concluded the fifth Inter-University Program on International Criminal Law and Procedure (IUP) with a lecture at the Lebanese American University. The IUP is organized by the STL in cooperation with nine prominent Lebanese universities and the T.M.C. Asser Institute in The Hague, it said.

In addition, the STL President gave a lecture at Saint Joseph University on Evidentiary Rules of the STL and the Lebanese Legal System.

"I strongly believe that the STL has been established for Lebanon and, therefore, has an obligation to keep the Lebanese authorities and its people informed about the Tribunal’s work. This is the reason for my bi-annual visits during which I meet officials, brief them on the court proceedings and other activities, hear their views and answer any questions they may have. I particularly believe in reaching out to the Lebanese youth, who, I am confident, will move their country forward”, said the President.