Damascus Says Pushing on with Peace Talks despite Opposition Exit 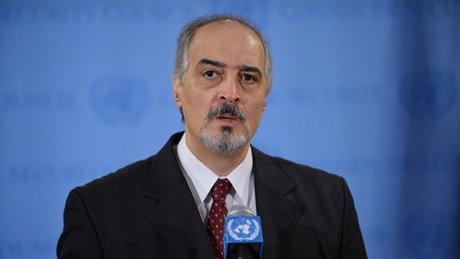 The Syrian government pushed on with peace negotiations in Geneva Wednesday despite the main opposition's withdrawal, presenting its vision for a new unity government, including dissidents considered more acceptable by Damascus.

The regime's chief representative in Geneva Bashar al-Jaafari said the current round of U.N.-brokered talks was continuing even though the main opposition High Negotiations Committee (HNC) has suspended its formal participation in the talks.

"The U.N. considers the talks to be ongoing in spite of the withdrawal," Jaafari told reporters following a meeting with U.N. mediator Staffan de Mistura's deputy Ramzy Ezzeldin Ramzy.

"No faction has a veto power over confiscating the intra-Syrian talks in Geneva," said Jaafari, who was set to meet de Mistura on Thursday.

The HNC -- an umbrella group comprising the main Syrian opposition and rebel factions that came together in Riyadh in December -- announced Monday it was putting its participation on hold to protest escalating violence and restrictions on humanitarian access in Syria.

"If they leave the talks, the talks will not lose anything," he said, insisting that the HNC "do not represent the Syrian people. Quite the contrary."

"By leaving they may be taking away a major obstacle and that will allow us to reach a solution," said Jaafari, who spoke through a translator.

The troubled Geneva talks are aimed at ending Syria's five-year war by achieving political transition, a new constitution, and presidential and parliamentary elections by September 2017.

But the fate of President Bashar Assad remains a major sticking point, with the HNC insisting any peace deal must include his departure, while Damascus insists his future is non-negotiable.

Jaafari on Wednesday said his delegation had laid out its views on what a "broad-based unity government" should look like, insisting it must "comprise representatives of our current government (and) representatives from the opposition, ... technocrats and independent figures."

But he added that only opposition members "who reject terrorism (and) who do not work for the sake of a foreign agenda" would be permitted to join.

According to his definition, this would rule out the HNC, who he described Wednesday as a group of "extremists, terrorists and mercenaries" working for regional powerhouses Saudi Arabia and Turkey.

Syria's war began as a peaceful revolt demanding democratic change, but morphed into a multi-front civil war after the Damascus regime unleashed a brutal crackdown against dissent.