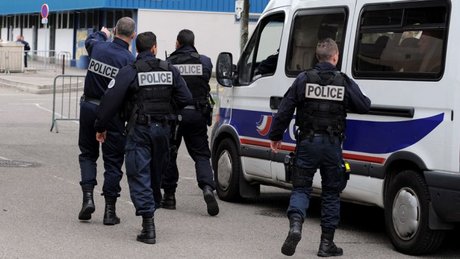 Four suspected people smugglers whose car was involved in a collision with a lorry after a high-speed police chase in northern France are Iraqi Kurds, prosecutors said Friday.

The British-registered Audi had crossed into France from Belgium on Thursday after police tried to check their vehicle at a parking area known to be used by smugglers.

Two of the four people were injured by police gunfire and two others were hurt in the accident on Thursday.

All four were still being treated in hospital on Friday, prosecutors said.

One of the suspects who suffered gunshot wounds is in a serious condition.

Prosecutors said the men had been identified as Iraqi Kurds.

Prosecutors in the northern French city of Dunkirk have opened a preliminary investigation into trafficking offenses and causing danger with a vehicle and driving without insurance.

But they have not yet been able to question the suspects because of their state of health.

The prosecutor said police had been alerted by drivers after the men were seen trying to smuggle people aboard lorries in the parking area in Belgium.

Northern France and Belgium are jumping-off points for many migrants and refugees trying to reach Britain.

The police chase came to a dramatic conclusion on the A16 motorway at around 6:00 am when the men's car first hit a car on the hard shoulder and then collided with a lorry that was stationary after an earlier accident.