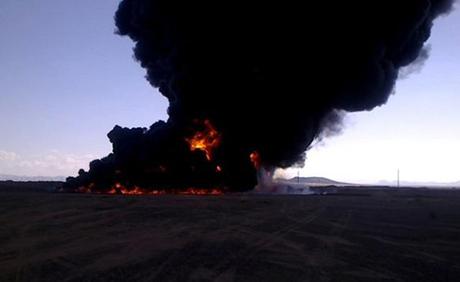 Operations at Aden's refinery came to a complete halt as crude oil supplies dried off after a pipeline was attacked in the latest act of sabotage on oil and gas installations in Yemen, a company official said Monday.

"The company's operations have stopped due to the lack of crude oil," said an official from the government-owned Aden Refinery Company.

"The supply of crude oil to the refinery has stopped since Saturday after the pipeline that links (the eastern) Marib province to Ras Issa terminal in Hudaydah (on the western coast) was sabotaged" on Friday, he said on condition of anonymity.

The official warned of "further shortages in oil derivatives in the coming days in Yemen," an impoverished country which has been hit by a political turmoil that has left its economy on the brink of collapse.

Many areas of Yemen are already facing severe shortages of petroleum products.

The company's refined oil reserves can supply the local market for 10 days, said the official, warning of a severe fuel shortage if the government failed to act.

Oil and gas pipelines frequently come under attack in the restive south Arabian Peninsula country either by tribesmen or Al-Qaeda militants.

Also in October, gas exports from the Belhaf terminal on the Gulf of Aden were interrupted for about 10 days after the 320-kilometre (200-mile) pipeline from Marib was attacked in the restive province of Shabwa.