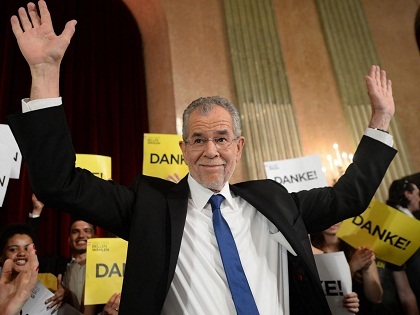 Austria's Norbert Hofer narrowly failed Monday to become the EU's first far-right president, after his ecologist rival scraped victory in a knife-edge election that was a rude wake-up call for the continent's established parties.

The interior minister said that Alexander Van der Bellen won 50.3 percent of the vote in Sunday's election, compared to 49.7 percent for Hofer, presented as the friendly and moderate face of the anti-immigration, populist Freedom Party (FPOe).

"Of course I am sad," Hofer said on Facebook as he conceded defeat. "I would have loved to have looked after this wonderful country for you as president."

He added: "Please don't be disheartened. The effort in this election campaign is not wasted, but is an investment for the future."

Preliminary results late Sunday had put Hofer 3.8 percentage points ahead in the runoff for the largely ceremonial but bitterly fought-over post of Austrian head of state.

But this paper-thin margin was erased after a record 700,000 postal ballots were counted during Monday, dramatically putting Van der Bellen ahead by just over 31,000 votes in the final tally.

Most observers had thought that the professorial and somewhat disheveled Van der Bellen, 72, would fail to beat his polished younger rival after lagging 14 points behind him in the first round on April 24.

"But in the last 14 days, there has been such a momentum among voters -- musicians, actors, workers, totally different people across all generations, professions and all sections of society."

Gun enthusiast Hofer, 45, had tapped into unease about the record number of asylum-seekers at the height of Europe's migrant crisis, with his typical supporters made up of poorly educated working-class men.

Around seven out of 10 working-class voters plumped for Hofer.

But this self-proclaimed "gladiator" has also toned down the FPOe's message to appeal to voters disillusioned with the centrist parties in the current government that have dominated national politics since 1945.

His strategy mirrored the success of other fringe political figures across Europe, for example in Germany, France and Britain, as well as further afield as seen with the success of Donald Trump in the United States.

"Relief to see the Austrians reject populism and extremism," Valls tweeted about the result. "Everyone in Europe should learn from this."

In a first round of voting, candidates of the Social Democrats (SPOe) and their center-right coalition partners People's Party (OeVP), were thrown out with just 11 percent of the vote.

Their failure means that for the first time since 1945, the two parties had to watch the runoff from the sidelines. This was the final straw for Werner Faymann of the SPOe, who quit as chancellor on May 9.

But Van der Bellen now has to unite a polarized nation after what has been a bruising election campaign in a wealthy and stable country more used to a polite and consensual way of conducting politics.

"The main rift is ... around issues like the EU, migrants and trust in the system," political analyst Thomas Hofer told AFP.

The new chancellor, railways boss Christian Kern, also has a Herculean job before him: winning back voters from the arms of the FPOe in time for the next general elections, due in 2018, and jump-starting the moribund coalition with the OeVP.

Despite narrowly losing out on the presidency, party leader Heinz-Christian Strache, 46, will have been boosted by the close contest in his hopes to become chancellor in two years.

His party is leading in opinion polls with more than 30 percent of voter intentions.