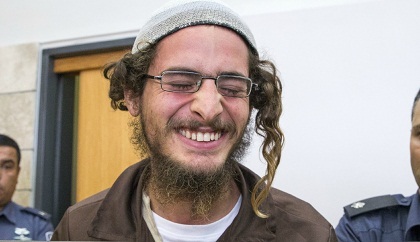 Israel released a Jewish extremist from 10 months of detention without trial on Wednesday, the longest a Jew has ever been held under the controversial powers usually reserved for Palestinians.

Meir Ettinger, 24, was one of a number of Jewish extremists interned by Israel last year after a firebombing in the West Bank killed a Palestinian toddler and his parents, triggering an outcry over the apparent impunity of the perpetrators of such attacks.

Ettinger has never been directly implicated in the arson but he was accused of being a key figure behind a wave of nationalist hate crimes targeting Palestinians and Christians in Israel.

He was released from Eshel prison in the southern city of Beersheba, the last of those interned last year to be freed, an Israel Prisons Service spokesman said.

The Shin Bet internal security agency, which ordered his internment, confirmed that the 10 months Ettinger had spent in so-called administrative detention was the longest ever served by a Jew.

His release is subject to a raft of conditions, a Shin Beth spokesman told AFP.

He will be banned from visiting the occupied West Bank for a year and Jerusalem for six months.

He will also be placed under night-time curfew in his home for the next four months, and prohibited from contacting a list of nearly 100 right-wing figures for six months.

Ettinger's grandfather Meir Kahane founded Kach, a now outlawed far-right movement that advocated the expulsion of Arabs from Israel. Kahane was assassinated in New York in 1990.

Administrative detention provides for suspects to be held without trial for periods of up to six months, renewable indefinitely.

Israeli authorities say the powers enable them to hold suspects while continuing to gather evidence, with the aim of preventing further attacks in the meantime.

They say the powers also allow them to avoid divulging sensitive intelligence in court proceedings, but the practice has long been criticized by human rights groups.

There are currently around 750 Palestinians held in administrative detention, according to the Palestinian Prisoners Club.

"Ettinger's persecution was solely because of his opinions," the group quoted his lawyer as saying ahead of his release. "This is a dictatorship and trampling of civil rights."

I thought him to be your father.