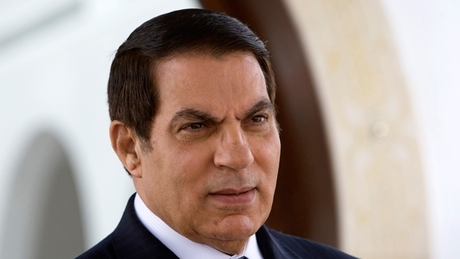 Tunisia's toppled leader Zine El Abidine Ben Ali filed a complaint on Friday against a private television station in an attempt to stop a comedian impersonating him, his lawyer said.

"I have filed a complaint at the request of Ben Ali himself," Mounir Ben Salha said. "This is a complaint aimed at halting the transmission, and a hearing has been set for Tuesday."

The former president was ousted in a revolution that sparked the "Arab Spring" in 2011 and has since lived in exile in Jeddah in Saudi Arabia.

The television program "violated his dignity" said the lawyer, who filed a complaint for "violation of honor and identity theft."

Moez Ben Gharbia, the head of Attessia TV that broadcasts the show, confirmed to AFP he had been informed about the complaint, but said that "of course" it would continue to be aired.

In "Hello Jeddah", which goes out after the breaking of the fast in the Muslim holy month of Ramadan, comedian Migalo imitates Ben Ali and claims to be broadcasting live from the Saudi city.

On Thursday night, Ben Ali supporter Mondher Guefrech began to cry when he heard what he thought was the voice of the ousted strongman.

The day before, Imed Dghij, leader of a now dissolved brutal pro-Islamist militia, engaged in a virulent exchange with "Ben Ali".

Reservations have been expressed in some quarters about the satirical broadcast's suitability.

"There are no ulterior motives. Among the guests on the program are people who are pro-Ben Ali, while others are against him. It's only a joke," he said.